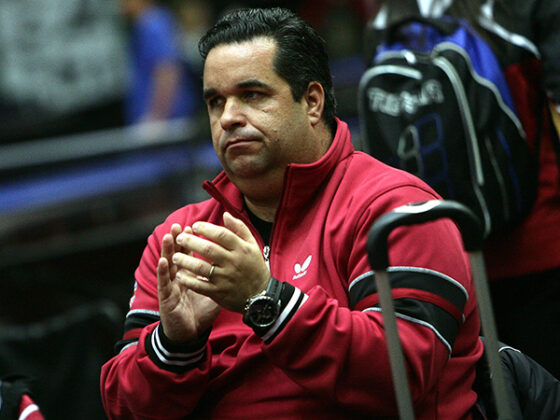 The hard work is done and with less than 24 hours to go before the start of the Paralympic tournament in Tokyo, British Para Table Tennis Team Performance Director Gorazd Vecko is quietly confident that his athletes are as well prepared as they can be for the challenges that lie ahead.

“When we go to the training hall I can see that all of them are the best prepared ever for the Games,” he said, “because you can see they are playing 110% better than they were a couple of months ago.

“Because of the pandemic they couldn’t train like they wanted to, but we have done as much as we can and they are prepared and together as a family. They want to start the competition now and with one day to go I have good feelings about the Games and the performances of the players.”

The team for Tokyo is a blend of youth and experience and includes four players who are making their Paralympic debuts – Tom Matthews, Megan Shackleton, Billy Shilton and Joshua Stacey.

“They have been told to enjoy it” said Vecko, “and they say it is incredible and they didn’t imagine it would be like this.

“I told them, ‘This is why you have been working for the last four years to qualify for the biggest stage in your life and if you can perform on the big stage it will be even better.’

“You can try and explain to everyone, but they have to see it with their own eyes. Seeing the other athletes from around the world and from other sports is an amazing experience for them.”

“The barriers here are red and usually we have green or blue, so the conditions are different to what we are used to and that is why it is very important to get as much as possible from these sessions.

“It is an experience to play in this hall – when you see all around the hall the signs that make you aware that you are playing at the Paralympic Games and this can affect athletes.”

Will Bayley, who is defending his men’s class 7 title here, agrees that Tokyo is proving to be an amazing host city.

“The Japanese people have been incredible since we’ve been here,” he said. “They’ve been the biggest help and most supportive games makers I’ve ever seen. It’s just been a real privilege to be here and to be a part of these Paralympics has been quite special because the volunteers have been incredible.

“I think we’ve all settled in really well and we’re all quite relaxed and looking forward to just starting the tournament – we just can’t wait to get going. We’ve done a lot of training for this so everyone is just excited to get out there and show what we can do.”

“They are all excited,” said Vecko. “I would not say they are nervous which is really nice and really positive. Out of the training hall we don’t speak about table tennis but give them free time to do whatever they want to do and they are all together as a team.

“Nobody is stressing or nervous about results because we believe they will come and I’m sure that all the athletes that are here representing ParalympicsGB will give 120% on the table. I hope they will try to put how they are playing in training into the competition because then we could have an amazing Paralympic Games.”