Paralympian Facey switches to cycling in search for new challenge

Two-time Paralympian Ashley Facey has put down his table tennis bat to pursue a new career in cycling. 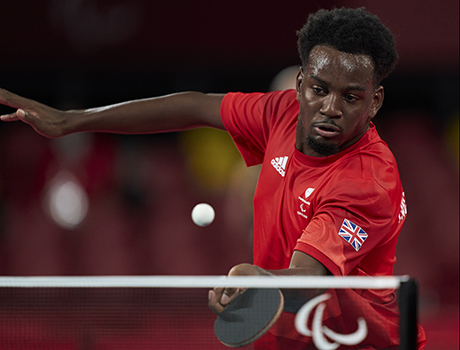 Two-time Paralympian Ashley Facey has put down his table tennis bat to pursue a new career in cycling.

The 27-year-old Londoner has been a member of the British Para Table Tennis Team Performance Squad since 2009, representing his country in World and European Championships and in the Rio and Tokyo Paralympic Games, but is now hoping to achieve success in another sport having joined British Cycling’s development/foundation team.

“Table tennis has been brilliant to me,” he said, “and I’ll miss it a lot. I’ll miss the coaching staff – they’ve been amazing and believed in me – and I’ll miss my team-mates – they are a lovely bunch of people. I’ll miss everyone but after Tokyo I needed a new challenge in life and I’ve found it in cycling.”

Facey’s passion for cycling was born during lockdown in 2020 when training was suspended, and he decided to remain in Sheffield to focus on his fitness rather than return to his London home.

“I started running but I thought it was a bit boring after a while, so I decided to invest in a bike and went out exploring the Peak District,” he said.

“I’ve never spent so much time outdoors in my life, but I really enjoyed the peace and the countryside. I didn’t really like cycling before lockdown, but it triggered something inside me and I knew I had the ability, the strength and the background for track cycling. I was told five or six years ago that I’m strong and have the genes of a sprinter but once I start working with the coaches, we’ll see what I’m best suited for.”

Facey competed in his first Paralympic Games in Rio 2016 and won his first major championship medal at the European Championships in 2017, taking silver in the men’s class 10 team event with Kim Daybell.

He ranks winning the team silver with Daybell as the highlight of his 13-year table tennis career but is most proud of being part of the British Para Table Tennis team.

“Being a part of this team has been incredible,” said Facey, who reached a career high of world No 8 in men’s class 9 in 2018. “I’ve learned resilience every day, how to cope with being challenged and being put under pressure – how to get out of situations when you are uncomfortable and what to do when it is not going well.

“It’s just been an amazing journey and I’m proud of everything I’ve done in the sport. Representing my country, going to Europeans, Worlds and two Paralympic Games was amazing and winning a team medal with Kim and then doing it again two years later with Kim and Josh. But winning the silver medal with Kim was the best.”

Having competed in two Paralympic Games in table tennis, he is hoping to represent ParalympicsGB in cycling but is not setting himself any immediate targets.

“It’s a new chapter and we’ll see what it brings,” he said, “but I’m really excited to wear that British cycling jersey. Hopefully one day that will happen and that’s all I’m thinking about at the moment.”

BPTT Performance Director Gorazd Vecko said: “I am very sad that Ashley is leaving table tennis but he will always be part of our BPTT family and we will continue to be here for him and help him even after he has changed sports.

“Ashley grew up in a tough environment and BPTT gave him the opportunity to be part of a programme that is not just about achieving the best results but also about personal development and helping athletes to change their lives.

“Ashley has always been very talented and it has been great to watch him grow as a person and an athlete. His finest achievement was probably taking silver in the team event at the 2017 European Championships with Kim Daybell, when he played superbly in doubles and singles, and he also took team bronze in the 2019 Europeans.

“He represented his country in two Paralympic Games and was one or two points away from playing for a medal in Tokyo; he was top 10 in the world in men’s class 9 and he made the final in four factor 40 events in China, Japan and twice in Slovenia, all of which were very strong tournaments so also great achievements for him.

“We all wish him the very best in his new sport and look forward to seeing him compete in Paris.”