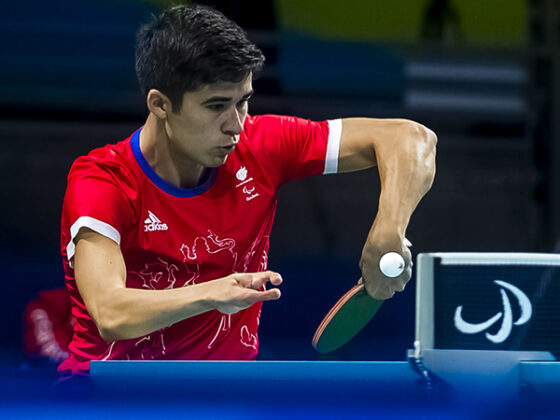 Para table tennis star Kim Daybell, who put his Tokyo ambitions on hold last March to join the NHS fight against COVID-19, has taken on a role as a mentor with the True Athlete Project (TAP), a non-profit organisation formed of world-class athletes, coaches, psychologists, mindfulness teachers and policy makers.

The programme matches aspiring young athletes with experienced international athletes for a year-long learning experience supported by a holistic curriculum based on five themes – performance, identity and values, mindfulness, community responsibility and nature and connectedness.

“The aim of the programme is to support the person behind the young athlete,” said former tennis player Sam Parfitt, founder and CEO of TAP, “and prove that when the person flourishes, so does their sporting performance.”

Sheffield born Daybell, who is currently working in A&E at a North London hospital, was attracted to the ethos behind the programme and is keen to pass on his experience to a young athlete.

“They are very into mindfulness and wellbeing and that kind of wholesome, holistic approach to the athlete and I’ve been interested in that side for a while,” he said.

“I’ve been an athlete for a long time now – through three Paralympic cycles – and have that experience of balancing education and being a teenager and trying to make it work with everything else in general life.

“It is part of your duty as an athlete to pass on that knowledge and experience to the next generation coming through and give them those tools to try and help them.”

Daybell is mentoring 16-year-old fencer Adekunle Taiwo and is looking forward to working with an athlete from a different sport.

He said: “It’s really interesting because you can get very wrapped up in your own sport and how you do things, and it is interesting to see how other sports operate. I will definitely learn from Adekunle as well.

“It is a good reminder of how naïve and young you were when you first started and how far you’ve come. I think it is nice to check in with that again and just remember and appreciate what you’ve been through and apply that to your own sport and your own life.

“TAP try to develop the mentor as well and teach you those skills to be able to impart knowledge because that is not an easy thing to do, especially when you have spent your whole career being really focused on yourself.”

Daybell’s British Para table tennis team-mate Jack Hunter-Spivey is one of the TAP mentees and is being mentored by former snooker world champion and BBC commentator Ken Doherty.

“Ken has been in similar situations to me,” said Hunter-Spivey. “He’s obviously been more accomplished than I have and can talk about things that not everyone else can relate to. For me it is just being a sponge and soaking up the knowledge and experience that he has got in a different sport and I can put into table tennis.

“I’ve made my biggest gains from external things and for me to make those next gains I need to think outside the box a little more and I can’t wait to see how it goes.

“I think it helps that Ken is still competing – last time I spoke to him he was preparing for the snooker Shoot Out so he was talking to me about how he is training, who he is training with, how he is approaching it, when he is travelling to the venue; all those sort of details are valuable for me in seeing how he prepares (for tournaments) so it definitely does help.”

The 25-year-old from Liverpool has spoken openly about his own mental health problems and feels strongly that mentoring programmes such as TAP can only benefit athletes in the high-performance environment.

“I’m lucky enough to be part of the BPTT programme and have those people around me who noticed something was wrong when I was going through my toughest time,” he said.

“Other people might not have that support network around them and even if you do it is still really hard to reach out so if people can make it more normal to speak about it especially from a mentor/mentee perspective that can only be a positive thing.”

“It is a really good way of offering external support to athletes that are on our programmes,” he said, “and to really digest and talk about performance in different ways. What TAP is trying to do in a nutshell is broaden the athletes’ perspectives, give them more knowledge and understanding of what people in other sports do, how they dealt with situations, how they dealt with times of stress, times of very high performance. This aligns with UK Sport’s future strategy of not just winning but how we win.

“Anyone involved in high performance sport wants to be the best they can be, but people go on different journeys and what one person needs can be completely different to somebody else. So, it takes a lot of understanding and a lot of listening and it is definitely one of the modern challenges of performance coaching because we all want to win but there are different ways to get there.

“I think this sort of programme is illustrating that there isn’t one significant way of winning – there can be lots of different ways.”