On the final day of the Czech Para Open in Ostrava the British Para Table Tennis team finished a successful tournament by taking three gold medals in the doubles events. 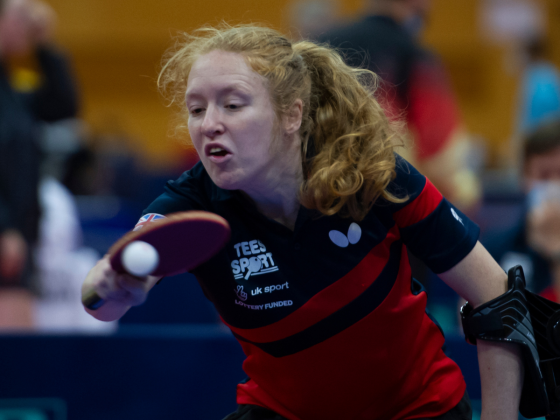 On the final day of the Czech Para Open in Ostrava the British Para Table Tennis team finished a successful tournament by taking three gold medals in the doubles events.

Paul Karabardak and Billy Shilton were playing together for the first time and they lost a close first match against the Swedish pair of Jonas Hansson and Sam Gustafsson 3-2 but progressed to the knockout stages with wins over Zbynek Lambert and Daniel Horut from Czech Republic (3-1) and the Austrian/Israeli combination of Christian Scheiber and Hadar Bahat (3-0). They had to fight hard in their quarter-final against Borna Zohil from Croatia and Haris Eminovic from Bosnia-Herzegovina before taking the deciding set 11-9 to set up an all-British semi-final against Bayley and Perry.

The first two sets were shared but Karabardak and Shilton raced through the third 11-1 and then completed a 3-1 win 11-9 in the fourth. In the final they took on the class 6 world and European champion Peter Rosenmeier and class 7 European team silver medallist Henrik Brammer from Denmark and after taking the first two sets 11-9 edged a tense third set 16-14 to take the gold.

“I really enjoyed playing with Billy and he was excellent throughout the competition,” said Karabardak. “It was a bit difficult in the early matches but when we got used to playing together, we started playing really well. It’s tough playing team-mates as we are all really close and good friends but it’s sport and you want to win so you have to try and be professional and put it out of your mind. I’m over the moon with gold and thought we deserved it. It was difficult against Denmark as Peter is so strong but I managed to be consistent and steady and Billy played really well so it was good to beat them.”

“I’m so happy to win gold with Paul,” said Shilton. “I think it took us a little bit of time to get used to the way we both play but after our first match we played great and communicated really well. It was hard to play against Will and Martin in the semi-final as we know each other’s games so well and we all get on great, so it wasn’t easy. Paul played amazingly well and I’m really happy to take gold.”

Bayley and Perry were also competing together for the first time and they came through their group undefeated with wins over Henrik Meyer and Benedikt Muller from Germany (3-1), Vjekoslav Gregorovic and Pavao Jozic from Croatia (3-0) and Ivan Bogdanovic and Mihajlo Radovanovic from Serbia (3-2). A 3-0 win in the quarter-final against the class 7 Polish pair of Michal Deigsler and Tokyo bronze medallist Maksym Chudzicki took them into the semi-final against Karabardak and Shilton but after losing 3-1 they had to be content with bronze.

“It’s always tough playing your team-mates,” said Perry, “because you are playing someone you train with every day. They are not just your teammates they are your friends and within the squad we consider ourselves a family. At the end of the day you are there to do a job and credit to Billy and Paul as they played really well and congratulations to them on winning gold.

“Will and I played some really good doubles especially in the quarter-final against Poland as they are a very strong team, so we were both really chuffed to win that 3-0. Will has obviously got all the experience you could ask for – we’ve all lost count of the number of medals that guy has won and the things he has accomplished in this sport – so to play alongside him was great and he was really supportive.”

“Martin and I played some great doubles,” said Bayley, “and we had a really good win against Poland. It’s always difficult playing your own country so playing against Billy and Paul was tough because we know them so well and they know us.  We tried our best but they played very well and deserved to win. It was great to play with Martin – I really enjoyed it and I think he played really well.”

Fliss Pickard and 14-year-old Sophia Kelmer, silver medallist in the women’s class 8 singles, began the round-robin event with a comprehensive 3-0 win against Flora Yem and Raushan Orynbayeva from Kazakhstan. They had to work much harder to beat Barbara Jablonka and Magdalena Sutkowska Pawlasek, eventually taking the match 11-6 in the fifth after the Polish pair had come back from 2-0 down to level at 2-2.

Their third match also went to five sets and despite saving five match points to fight back from 10-5 down to level at 10-10 it was the Swedish pair of Cajsa Stadler and Smilla Sand who edged it 12-10 to secure a 3-2 win. They recovered from that disappointment to win their final match against the unbeaten French pair of Morgen Caillaud and Lucie Hautiere, coming back after dropping the first set to win 3-1 and claim the gold.

“To win gold with Sophia is amazing,” said Pickard. “I think we worked really well together and we are both fighters. We were unlucky to lose against Sweden having come back from 10-5 down in the fifth but we came back stronger against the French.”

Sue Bailey and class 5 Alexandra Saint Pierre, who won her fourth consecutive singles title here, topped their group with wins against Beata Pirova and Jana Valentova from Slovakia (3-0) and the Serbian pair of Zorica Popadic and Biljana Ubovic (3-1).

A 3-0 semi-final win against the Japanese pair of Kimie Bessho and Ena Miyazaki took them into the final where they faced the four-time class 3 European team gold medallist Helena Dretar Karic from Croatia and Jung Young from Korea, the class 5 Rio and Tokyo Paralympic bronze medallist. Bailey and Saint Pierre lost the first set but came back to lead 2-1 and then held their nerve in a tight fourth set to win it 14-12 and take the gold.

Sue Bailey and class 3 Francois Geuljans won their group after 3-0 wins against Boris Travnicek and former world and Paralympic champion Alena Kanova from Slovakia and the Dutch pair of Sem Roelofs and Maria Boers. That gave them a bye into the semi-finals where they beat the Croatian pair of Tomislav Spalj and Helena Dretar Karic 3-0 to take them into the final and a second match against Travnicek and Kanova. This time it was the Slovakian pair who proved the stronger and they took the gold after a 3-1 win.

“I’m thrilled with how I have played throughout this tournament,” said Bailey. “This week has given me such confidence and self-belief in how well I know I can play when I relax and have the confidence to play my game. Throughout the women’s and mixed doubles we played brilliantly beating some excellent players and I know how strong I am now not just as a singles player but as a doubles player as well.

“There are areas I need to go home and work on but I am really looking forward to the future and hopefully competing in the World Championships as well as the Commonwealth Games.”