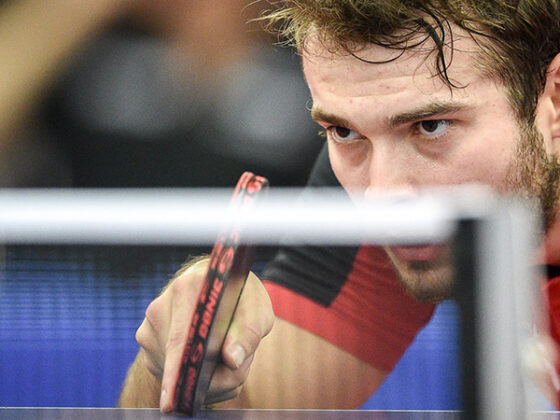 Sam Walker says he feels no pressure as he prepares for an unexpected crack at securing qualification for the Tokyo Olympics.

Walker will compete alongside Paul Drinkhall at the European qualifying tournament in Portugal, starting on Wednesday, with Liam Pitchford electing to miss the competition as he will qualify for Tokyo by virtue of his world ranking.

Tin-Tin Ho and Charlotte Carey will once again represent Team GB women. But while both of them could qualify, only one of the two GB men competing in Portugal will be able to – if both end up in a qualifying place, Drinkhall will go to Japan as he is the higher-ranked player.

Walker, who is only just back in training after suffering an ankle injury on his return to competition at the WTT Contender event in Doha in March, is relishing the opportunity he has suddenly been given.

He said: “I wasn’t thinking about the Olympics at all. For me, it was something that went when we didn’t qualify as a team – I’d already faced the fact that I wasn’t going to go and it hasn’t been part of my goals and processes.

“Now I’ve got this chance that has really come from nowhere and I feel there’s no pressure on me because it’s an opportunity I didn’t feel I was going to get.”

The injury and consequent lack of practice in the run-up to the tournament may not be ideal, but Walker said that was another reason why he can go into the event with nothing to lose and everything to gain.

“I’m going into it more to play matches,” he said. “I believe I’ve got the capabilities to qualify, but if I’m fit and able to play matches, that’s really what I’m going for, because I haven’t played a tournament for more than a year. Any qualification that comes out of that is a bonus and would be fantastic.

“I’ve got no pressure – I haven’t done any training, I didn’t expect to have this chance and I’m coming back from injury. It’s a bonus for me and I’ll try to go out and get some matches under my belt and see what happens.

“Anything can happen at tournaments like this and I know that on my best day I’ve got every chance to qualify.”

Walker’s injury was certainly a cruel blow, coming on only the 12th point of his first match against Italy’s Niagol Stoyanov – his opening tie at his first tournament in a year.

It looked as if the European qualifiers may have come too soon, but Walker admitted that once Pitchford’s absence was confirmed, getting fit for the tournament has given him motivation.

“It was such a blow to be back at a tournament after a year out due to covid and in the first match, 6-5 down, to get an injury like that which I wasn’t going to recover quickly from,” he said.

“The physio said it would be six to 12 weeks and I’m only into the sixth week of rehab now, so it was a tough decision to go to Portugal because I didn’t know if I was going to be fit. We decided that I would be fit to play but probably not have much practice before.

“It’s definitely lifted my spirits and given me something to work towards with the rehab – definitely some positive news after the injury.”

As for the possibility of qualifying for the Olympics but having to step aside if Drinkhall matches that feat, Walker is philosophical.

“If we both qualify then Paul will go with Liam because he’s higher-ranked, and that’s fine – it’s well deserved and credit to him,” he said.

“If I manage to qualify but don’t get to go, it would give me a big confidence boost anyway that I qualified for the Olympics. If the reason I wouldn’t be able to go is because GB has a strong team, that’s a positive thing.”