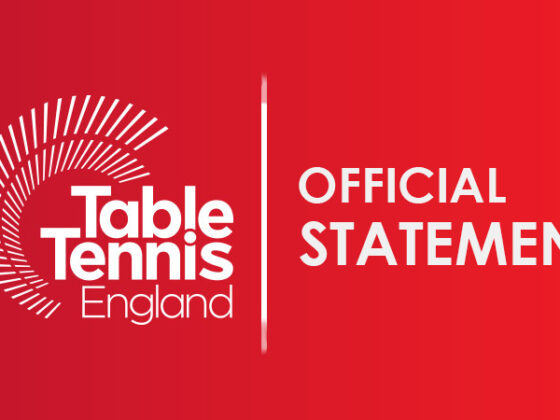 The Table Tennis England Board met today and has issued the following statement.

The Board has made various attempts to restore trust with Elected Deputy Chairman, Tony Catt.

After the EGM last month, a period of negotiation took place between Tony Catt, Sandra Deaton and Sara Sutcliffe on behalf of the Board. This negotiation was to determine a way to move forward and foster a productive working relationship, which would see Mr Catt retain his position on the Board.

All parties agreed in writing to a number of negotiated terms set out to be able to move forward. This included Mr Catt remaining on the Board as a corresponding member with full access to Board papers and the ability to communicate on Board matters via the Chairman, but not attending Board meetings. This arrangement would be in place for 6 months in order to allow him to prioritise his training and mentoring ahead of a full return to Board duties.  A joint statement was agreed and released on 5th February. At Mr Catt’s request that statement did not include specific details of the agreement.

On the 11th of February Mr Catt informed Sandra and Sara that he wished to withdraw from the agreement, despite the terms having been mutually agreed.

Yesterday, the Board became aware that Mr Catt had publicly circulated the terms of the agreement, which was specifically stated to be confidential as he had requested. This represented a further breach of Board confidentiality.

As a result, the majority of the Board concluded that it is no longer possible to restore a trusted working relationship with Tony Catt, which is essential for the Board to discharge its collective duties.

Today, the majority of the Board decided, by a vote of 9 to 2, with regret to require Mr Catt to resign in accordance with Article 26.1 of the Articles of Association, which takes immediate effect.

An election will be held to fill the vacancy, and the timetable will be discussed at the Board meeting on 5 March.

We now must move forward in a positive way and shift the focus back to preparing for the return of being able to play and ensuring we do all we can to help our clubs, leagues and members recover from the coronavirus pandemic.