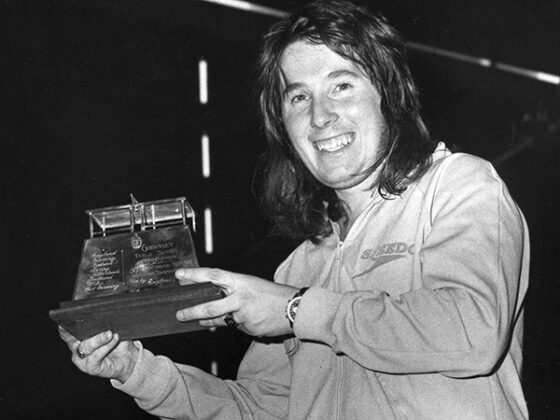 Tributes have been paid to Chester Barnes, a great enigmatic talent of table tennis, who has died suddenly at the age of 74.

Please click here to visit the Just Giving page set up in memory of Chester Barnes by his family.

Described as ‘the George Best of table tennis’, Chester was one of the most recognisable sportspeople in England in the 60s and 70s, when table tennis was a mainstay of the national media and his on and off-table persona led to a welter of publicity.

He first became national Men’s Singles champion in 1963 at the age of just 15 – still the youngest ever winner – and he made his senior England debut the same year.

A string of honours followed, including a further four national titles, while he rose to a high of No 16 in the world rankings in 1967.

Chester was born as George Barnes in east London in 1947 and his table tennis journey started in earnest during a holiday at Butlin’s in Clacton at the age of 12, where his skills earned him the title of ‘Boy of the Week’.

Within four years, he had become the national champion, defeating five England Internationals on the way to the title: Terry Densham, Jeff Ingber, Michael Thornhill, David Creamer and, in the final, Alan Rhodes.

There was controversy too, as Chester was known for giving forthright interviews to the press, even in his younger days. This led to conflict with, among others, national selectors and meant he was not rewarded with as many international appearances as perhaps he merited.

And although there was huge success domestically at the Nationals and various English Open events, plus an unbeaten record in the four years he played at the Quadrangular (Home Nations) Tournament, he never quite reached his potential on the top stage.

Chester played in the (World Championships) Swaythling Cup team in 1963, 1965, 1967 and 1969 with a highest finish of sixth in 1969. In the individual events, Chester never finished above the round of 32 in the Singles although with Denis Neale the pair were quarter-finalists in 1967 in the Men’s Doubles.

It was a similar story in the European Championships playing in the team event in 1964 (eighth), 1966 (sixth) and 1970 (seventh). Chester only reached a high of the round of 16 in the Men’s Singles in 1964 and 1966 although he did get as far as the quarter-finals in the Men’s Doubles, again with Denis Neale, and was runner-up in the Mixed Doubles with Mary Wright in 1966.

It was later in 1974 that his career began to fizzle out, and he announced his retirement in April 1975.

That was not the end of his sporting achievement though, as he went on to enjoy dozens of memorable moments as assistant to the great racehorse trainer Martin Pipe and became a well-known character on the racing circuit – indeed, his death was announced during TV coverage of the Cheltenham Festival earlier today and figures including legendary champion Tony McCoy were quick to pay tribute.

In table tennis, Trevor Taylor – himself a national champion – was a great friend of Chester for almost 60 years and lives literally around the corner from his house in Devon. The two families are godparents to each other’s children.

Trevor said: “I was only speaking to him yesterday, so it’s quite a shock.

“He was a very talented sportsman, he could turn his hand to anything – he was pretty good at golf, squash, tennis and he had lovely hands and ball skills.

“I got in the England team when I was 15 and he and Denis Neale were No 1 and No 2 and that was quite an experience for a green 15-year-old!

“He was a top European player but he wasn’t really suited to the travelling and dedication you needed to keep going. When he was younger, he put in the time and the hours but I think he lost a lot of interest in playing at the top level and preferred to branch out into other things.

“He was a real character and had a wicked sense of humour, which I was on the end of a lot of the time.  We did exhibition matches at Pontin’s for about 20 years and he was a brilliant exhibition player and he learned to become a comedian. I was the straight man and the butt of a lot of his jokes.”

Denis Neale, a great on-table rival as well as England team-mate, said: “He won the English championships at the age of 15 and I’m sure that won’t be beaten for a long time. It’s already stood for 58 years and there’s not many records go for that long.

“But the most important thing is he put table tennis on the map and got people talking about it. He made it a major minor sport, if you know what I mean, and that was 100% down to him and his personality. He was always in the newspapers. He was a top player but had that personality which people drew to.

“I was from the north and he was from the south and we had some fantastic battles. We had a big rivalry but we travelled the world together and I’m glad I was in that era when he got table tennis going.

“I hadn’t spoken to him or seen him for 30 years and then three weeks ago the phone rang and it was him and we talked for about an hour and a half. We’d arranged to meet at a table tennis tournament after covid and it’s very sad we won’t be able to now.”

Karenza Mathews, one of Chester’s regular mixed doubles partners, said: “He was certainly a lively character and there was never a dull moment when he was around. It was great fun going on table tennis trips with him. We got on very well together and our styles worked well together in doubles.

“He was a very talented player and in the era he played, he was a great champion and a great ambassador for the sport.

“When he was playing, table tennis was in the national papers on a weekly basis and on the TV, and I think that was quite a lot to do with his character. He was quite like the George Best of table tennis – he was trendy, he was fashionable and he had that trademark square bat.

“In some ways, I don’t think he reached his full potential. He could be brilliant but at the same time, he could lose concentration or something.

“It came as a shock to hear he had died so suddenly.”

Chester is survived by his wife, Jane, and son Lester. The condolences of all at Table Tennis England go to his family and friends.