Terry Gadsby, a stalwart of all things table tennis in the 80s & 90s and particularly associated with the Burton Uxbridge club, has lost his long fight with Parkinson’s disease, aged 91. 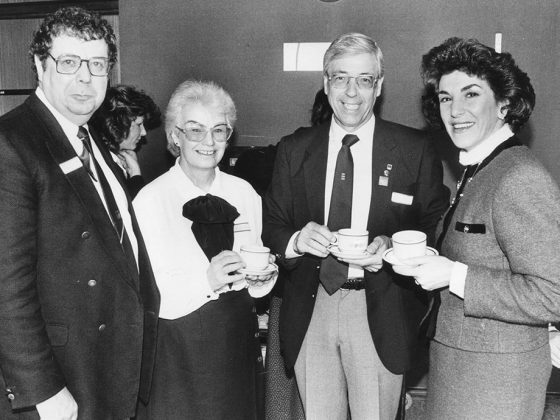 Terry Gadsby, a stalwart of all things table tennis in the 1980s and 90s and particularly associated with the Burton Uxbridge club, has lost his long fight with Parkinson’s disease, aged 91.

Terry, born & bred in Burton on Trent, first picked up a bat at the Burton Drill Hall in the late 1930s. He then threw himself into rowing and football, first competitively but going on to be heavily involved behind the scenes of both, becoming a Vice President at Burton Albion FC and Trent Rowing Club in Burton.

He returned to table tennis in the 70s and quickly found that playing wasn’t enough. He formed the hugely successful Uxbridge TT Club in 1984 and proceeded to set up a vast network of school sessions, junior coaching, and elite pathways, as well as entering many teams in local leagues.

To complement this, he was heavily involved in the Local Twinning Group that regularly played host and visited Burton’s Twin Town Lingen in Germany.

He became a great supporter of the ETTA’s British League set up, in which Uxbridge played host to many matches, becoming as famous for his wife’s Maureen’s food as the table tennis.

Always wanting a fresh challenge, Terry helped set up the first Women’s British League weekend in 1998, held at the Meadowside Leisure Centre in Burton, and was also involved in the Women in Sport Conference in 1990. He is pictured above (second from right) at the conference, along with Alan and Jose Ransome and Government minister Edwina Currie MP.

Locally, he continued to develop all levels of table tennis, becoming East Midlands Chair in the late 90s before proudly receiving the Premier Club of the Year Excellence Award in 2001 and telling all that would listen “we need more doers!”

The funeral will take place at Bretby Crematorium (DE15 0QE) at 1.30pm on Tuesday 21st June and afterwards, a celebration of his life at The Pirelli Stadium, Burton Albion FC (DE13 0AR).

If you would like to leave any comments or memories about Terry, you can do so on the muchloved website.