On Saturday, 5 February 2022, Kingston Upon Hull’s table tennis community received the very sad news that Pete Garvey – the city’s longest serving and most accomplished coach – had passed away following a short illness. 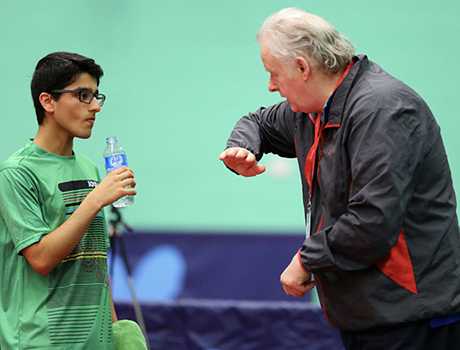 On Saturday, 5 February 2022, Kingston Upon Hull’s table tennis community received the very sad news that Pete Garvey – the city’s longest serving and most accomplished coach – had passed away following a short illness.

From the late 1960s to the present day, Peter William Garvey’s contribution to table tennis spanned a remarkable six decades.

Though increasingly unwell, Pete continued to coach until he was admitted to hospital just before Christmas. In fact, such was his dedication to the sport and his commitment to the youngsters he was helping that he still insisted on leaving guidance for their improvement.

That same dedication and commitment characterised Pete’s entire coaching career. A long list of successful players – internationals like Tony Clayton, Sally Clark (nee Marling) and most recently players like Gauri & Addi Duhan – who owe so much to him for their development stands as testimony to his ability and knowledge.

Over the years, these former pupils who achieved at the highest level were joined by many county representatives and nationally ranked players. And countless club players who were helped by Pete still continue to compete into their 50s and 60s.

In recent years, it became a familiar refrain from Pete that he had ‘one more project to complete’. Probably, it was about the only occasion when he spoke about table tennis and no one paid any attention. With Pete, there always was one more project.

Pete Garvey held the highest official coaching qualification available – but in a far wider sense than that, he was a top coach and a genuinely kind and helpful man.

Peter’s funeral will be on Tuesday 8th March at 11:30am at the Large Chapel, Chanterlands Avenue Crematorium, Hull, HU5 4EF. There are no restrictions on the number of attendees.

The family will then go to the Eastern Cemetery for the burial. Others are welcome to attend if they wish to.

After the service, anyone is welcome to go for a drink to celebrate Peter’s life at the Goodfellowship Inn (HU5 4AT).