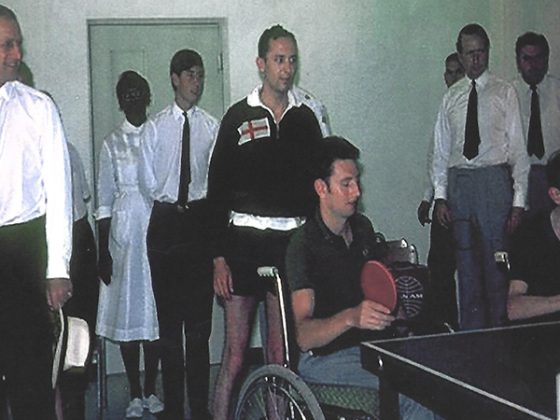 Paul Lyall, one of the pioneers of para table tennis in Great Britain and a Paralympic gold medallist, has died at the age of 77.

Paul was one of the British legends of the early years of the Paralympic Games. Having been paralysed after an accident in 1960, he was classified as a table tennis player.

The photograph on this page of Paul and Philip playing at this event, watched by Prince Philip and Prince Charles, will appear in the Table Tennis England Centenary Book due to be published in March.

In 1968, Paul played in his second Paralympic Games in Tel Aviv, again winning gold in Men’s Singles Class B and this time silver in the Men’s Doubles Class B, partnered by George Monaghon.

Paul, who lived in Middlesex, died on Christmas Eve. All at British Para Table Tennis and at Table Tennis England send condolences to his widow Sally and their family.