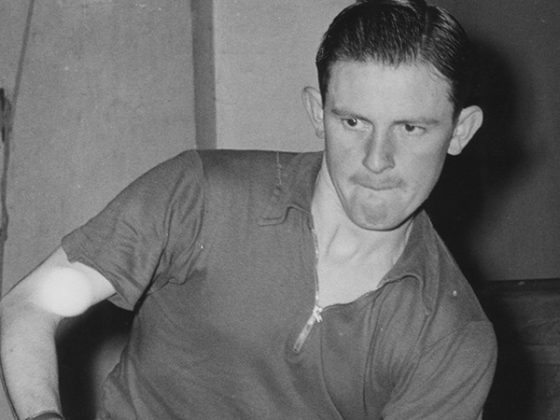 Former England junior and senior international David House passed away aged 86 on 30th November in the USA, where he had lived for many years.

David was born on 1st November 1935 in Bath and won many Open tournaments at both junior and senior level both in singles and in doubles with such top players as Ray Dorking, Laurie Landry, Bryan Merrett, Roy Morley, Kathy Best, Margaret Fry and of course with his first wife, Welsh star and world No 6, Shirley Jones.

David started playing at the Bath YMCA when he was 12 years old and his first junior cap was gained in the 1951/52 season. He was one of the very first junior international players and visited Sweden in 1952 alongside Ray Dorking and Geoff Pullar, with Leo Thompson as the team captain.

They left for Sweden on 31st December 1951 and were due to arrive in Gothenburg early the next morning, which they did after a very rough crossing over the North Sea, a little later than planned. Although rather shaken and a bit the worse for wear the lads went on to play their first tournament that evening.

The next day they played a senior team, SKF, who they beat 9-0. From Gothenburg they moved on to Valberg, followed by Halmstead, Lalholm and Falkenberg. More travelling followed, to Ystad, Hassleholm, Hogomas, Landskrona, Hassleburg, Nybro, Emmaboda and Mallaros. Then Boros and Lidkoping, Bolthorp and Skara before finishing in Falkoping and a farewell party.

Leo Thompson’s summary of the tour read: “Our boys made a grand team. Full of fun and high spirits but always well disciplined, considerate and well behaved. They gave a jolly good show of themselves.”  What an amazing experience for a young 16-year-old.

May 1954 saw further success when David won the Daily Mirror Men’s Singles title, the final being held at the Royal Albert Hall, there were over 11,000 entries in four events. A remarkable achievement in an incredible venue.

In November 1958, David and Shirley were married and a week after their wedding they were aboard the “Queen Elizabeth” sailing for New York and a new job with the British and Irish Railways. Originally intended to be for three years, David remained in the States, later moving to Chicago where he and Shirley set up their own travel company “Inter Trav” which is run today by two of their sons.

Lifelong friend, Ray Dorking, pays tribute to David: “David was an extremely good player, a real fighter on the table and would never give up. More importantly he was a decent and friendly man who I am proud to say was a great friend of my wife and I for many years.”

David re-married, and we offer our sympathy and most sincere condolences to Margot, to David’s sons and to all family and friends.