Sussex County Table Tennis Association lost one of its stalwarts when Derek Bunday died on 16th February 2022, two days after his 90th birthday. 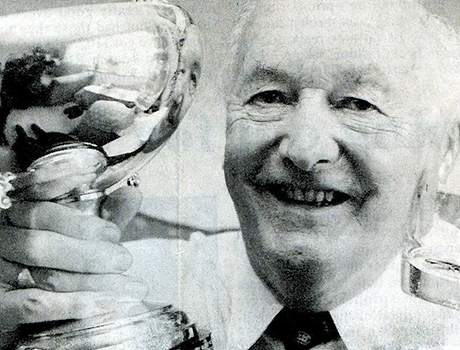 Sussex County Table Tennis Association lost one of its stalwarts when Derek Bunday died on 16th February 2022, two days after his 90th birthday.

Born in Isleworth, London on 14th February 1932, Derek, first started playing table tennis for his firm’s team, Lloyds Register Shipping TTC in London and carried on playing for them when they relocated to Crawley, designated a New Town, in the 1950s.

Later, the club amalgamated with Foresters in the Crawley/Horsham League at which time, Derek, signed for Horsham TTC and continued playing into his late 70s.

Derek was awarded the ETTA Leslie Forrest Memorial Trophy in 2004 for his contribution as Sussex Senior Match Secretary for 15 years. He was a member of the ETTA British League Committee from 2005-11 and held numerous positions for Sussex County over a 30-year period, ranging from President, Vice-President, Chairman, Selection Committee Chairman, County Veterans Secretary to Appeals/Disciplinary Committee Member.

It was during his time as Senior Match Secretary that Sussex twice won the County Championships Senior Premier Division title in 2005/06 and 2006/07, they were also runners-up twice.

Lloyds Register Shipping TTC in the Reigate, Redhill & DTTL was where Derek’s administrative career began, as Secretary in 1974. He went on to hold positions in the Crawley/Horsham League being honoured as their President as well as Chairman for 30 years, plus numerous other posts. He also contributed to the administration of Horsham TTC, Dolphins TTC, Horsham Angels TTC and Horsham British League Club.

For good measure, Derek qualified as a County Umpire in 1979.

On the playing front, Derek was a hard bat defender who was renowned for not being able to hit a ball. This often led to long matches, one of which took place in the Crawley/Horsham League for Lloyds Register Shipping TTC in their purpose-built room, the club being one of the best two or three in the league.

The match against Paymasters started at 7.45pm and Derek was first on playing a player with a similar style to his own. The players didn’t think about expedite and so the players settled down for a long evening. Team member, Dave Edwards, tells how he sat reading his club table tennis book while the match progressed, two hours later it neared its end and eventually Derek won 21-19 in the third.

Dave was next on and duly went on to win his match in three. Knowing it was not going to be an early finish, Dave went to his home nearby to watch the last episode of Monty Python which started at 10.15pm whilst team captain, Brian Antram was on the table. Dave returned to watch the remaining matches and play his other two – eventually leaving the hall just after 1am.

Good and long-time friend, Dave Edwards, described Derek as one of the most competitive players that anyone was likely to encounter, a fierce competitor who knew all the tricks – and used them. Dave and other table tennis friends had visited Derek on Monday to help celebrate his 90th birthday and took with them a card signed by many former colleagues and friends.

A lifetime dedicated to table tennis. Our condolences go to all Derek’s family and friends. His funeral is on 18th March at 3pm at Crawley Crematorium.