Karen Tonge, Chairman of British Para Table Tennis, has been awarded an OBE in the Queen’s Birthday Honours list for services to Paralympic table tennis. 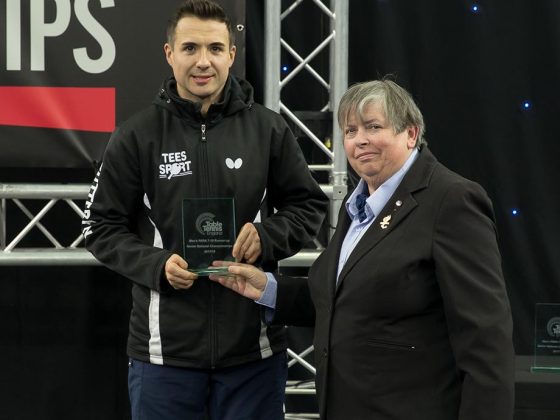 Karen Tonge, Chairman of British Para Table Tennis, has been awarded an OBE in the Queen’s Birthday Honours list for services to Paralympic table tennis.

Tonge, from Runcorn, who received an MBE in the New Year’s Honours 2009 for promoting table tennis at grassroots level, volunteering in sport and promoting healthy lifestyles, joined the British Table Tennis Association for People with Disabilities (BTTAD) as it became a Limited Company and was elected Chairman in March 2015.

The organisation was rebranded British Para Table Tennis in 2016 to reflect the change of emphasis to Elite athletes who have a disability, and with a new Governance Structure Tonge was re-appointed Chairman in 2019.

A member of the British Paralympic Association National Council since 2014, Tonge (pictured above with Paralympic champion Will Bayley) attended the Rio Paralympics in support of the Para table tennis team but due to Covid restrictions had to support from home for the Tokyo Paralympics.

An international umpire and referee, she has officiated at Para events in the UK and overseas and has been appointed Referee for the table tennis and Para table tennis events at the 2022 Commonwealth Games in Birmingham.

She was also made a member of Swaythling Club International in 2017 for those who have represented their country on the world stage or have given distinguished service to the sport of table tennis.

“I am delighted to accept the honour,” said Tonge. “This reflects everything the organisation has achieved over many years in transforming people’s lives and is recognition for the Para table tennis world. I was amazed to receive the letter as I thought it was requesting a supporting letter for someone else and I never dreamt that this would happen to me again.

“The Paralympic movement has developed over recent years with table tennis having 11 classifications for men and women with wheelchair and standing athletes. BPTT has been on a journey from not winning any medals in Beijing 2008 to seven in Tokyo thanks to support from UK Sport and The National Lottery, the hard work of a great Performance Director in Gorazd Vecko with his team of fantastic coaches, support staff and World Class Performance athletes inspiring the next generation of young athletes in the Pathway squad. We also have developed a great Board and volunteers who support our programme.”

Tonge has been involved in sport for people with disabilities since she became friends with a female wheelchair user, Trixie Hill, who was on the staff of a Chester Diocesan Youth Holiday. In 1984 she coached table tennis player Tony Edge to a silver medal at the seventh Paralympic Games held at Stoke Mandeville and her involvement with Para table tennis grew as she became Chairman of the North West Region of Table Tennis England in 1989.

Since 1999 she has also been Chairman of Halton Table Tennis Club, from where two-time Paralympian Jack Hunter-Spivey progressed to the British Performance Squad, winning Paralympic bronze in Tokyo last year.

Outside of table tennis Tonge has been a member of global volunteer movement Soroptimist International since 1984, which aims to transform the lives and status of women and girls through education, empowerment and enabling opportunities, and was Regional President for Cheshire, North Wales and the Wirral from 1994-95.

In 2013 she was invited to be a member of Rotary International in Runcorn and Paul Harris Fellow, who provide service to others, promote integrity and advance world understanding, goodwill and peace through the fellowship of business, professional and community leaders, serving as President from 2016-17.

In 2019 she was elected Deputy Co-Chair of the Games & Sport Division of the Sport & Recreation Alliance and re-elected in 2021.