Hosts Nottingham held off a fast-finishing Ormesby second team to take the Senior British League, Championship division title on the final weekend of this season’s competition. 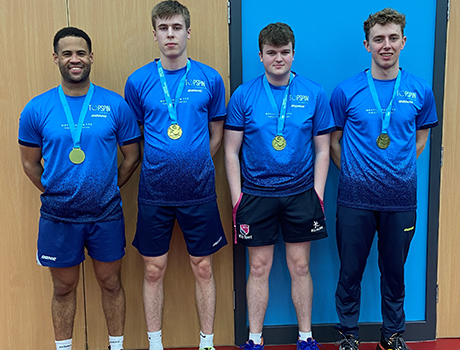 Hosts Nottingham held off a fast-finishing Ormesby second team to take the Senior British League, Championship division title on the final weekend of this season’s competition.

Nottingham were in pole position going into the weekend and they started with a blank fixture in the nine-team division, followed by a 5-3 victory over London Academy which was achieved from 3-2 down after Gabriel Achampong had beaten Joseph Langham-Ferreira 3-2 (5-11, 7-11, 12-10, 11-9, 11-6).

Ormesby II, a young squad featuring Josh Weatherby, Tom Rayner and David Gofton, with Jake Haygarth playing up from the thirds, started with matching 6-2 victories over Fusion II and Drumchapel Glasgow to stay in contention.

That saw Nottingham’s lead at the top cut to two points going into the final round, and Ormesby kept up the pressure with a 5-3 victory over St Mary’s Tigers, a match they clinched with Gofton’s win over Connor Whitehead in the seventh tie.

Nottingham opened up a 3-0 lead over Drumchapel, but also had to wait until the seventh match to take the key fifth victory as Maxim Stevens overcame Danny Bajwa. The final score was 5-3.

Topping the divisional averages was London Academy’s Ismaila Akindiya, who won 17 out of 18 for a success rate of 94.44%.

The Player of the Season award went to Josh Stacey of Perry Dale 08.

Division A1, hosted at Draycott & Long Eaton, saw Wensum maintain their two-point advantage over Milton Keynes as both teams won all four matches across the weekend.

That ensured Wensum lost only once, and their rivals twice, over the course of the season. The top two had beaten each other once each – both matches decided 5-4 – and it was ultimately a 6-3 defeat to mid-table PPong in January which cost Milton Keynes, who had a colossal eight-point gap back to Barrow in third place.

The averages saw a fantastic full house for Jake Haygarth of Ormesby III, who won all 20 matches a side which finished in sixth place.

In Division A2 at Cippenham, Kingfisher overhauled Ellenborough to take the title with a four-point advantage.

That was not the way the weekend had started, with the Ellenborough side holding a two-point lead. It remained that way after the first round of matches, but Kingfisher pulled level as they defeated Finsbury 6-3, while Ellenborough lost 7-2 to Joola Plymouth.

The top two met in the next round and it was a 6-3 victory for Kingfisher, and they duly clinched the title with a tight 5-4 margin over Plymouth in the last round – though that was in the end academic, as Ellenborough lost 7-2 to Brighton anyway.

Division B1, at Halton, saw North Ayrshire II claim the top spot, though not without alarm, particularly in the weekend’s first round when they lost 6-3 to Derwent.

That result, coupled with Ayrshire’s 7-2 success against Huddersfield in the final round, saw Derwent finished second, two points behind the Scottish side and ahead of Huddersfield on countback.

Of the regulars, Andrew Macpherson of North Ayrshire was top of the averages with 87.5% (21 out of 24) – though credit also to Josh Bramley, who won 9/10 for Derwent.

East Midlands and Nottingham II could only be separated by match ratio as Division B2 came to a close at St Neots.

Both teams won 12 and lost two, but it was East Midlands who got the verdict, helped by their 6-3 win over Nottingham in their first match of the weekend – and by a remarkable 9-0 defeat by Nottingham to Shrewsbury Academy.

Hats off to Adam Nutland in the averages – playing for fourth-placed Bromley, who won every one of his 28 matches this season.

Lilleshall and Greenhouse finished level at the top of Division B3, eight points clear of the rest. It was Lilleshall who prevailed on match ratio to win the division hosted at BATTS.

Greenhouse did, however, avenge their defeat by Lilleshall earlier in the season, registering a 5-4 success over the champions in the penultimate round – a match they never trailed as they opened a 5-2 lead.

Bogdan Postudor of Greenhouse won all 14 of his matches, while also impressing in the averages was Lee Horton, who won 18 out of 19 (94.74%) for Lilleshall.

Ormeau II streaked clear of the field, boasting a 100% record in winning Division B4 at Cippenham. They won all 14 matches and topped the standings by eight points, ahead of the hosts.

The champions were spearheaded by Zak Earley, who topped the averages with a mighty impressive 100% record from 26 matches.

In Division C1, held at Halton, two outstanding sides finished top of the pile, eight points ahead of the field. They were Draycott III and Birmingham Academy, and it was the former who had the best match record and so took the title.

Both won all four matches over the weekend and beat each other once, so the superior firepower of Draycott across the season decided it.

So it is not surprising that Fred Jones won 19/20, Joseph Cooper 18/19 and Daniel Jones 12/12 for the champions – although it was Birmingham’s Nathaniel Saunders who topped the charts with 16/16.

The Division C2 champions were Northfield, who had a 100% record from 14 matches to win the division by eight points from Shiyi Ling. Ormesby was the host club.

Of those who played more than a handful of matches, both Andrew Wilson of Northfield and Colin Wilson of Smash won 15/16 for an average of 93.75%.

Fusion V won Division C3 on home soil, with Larry Trumpauskas also topping the averages with 23 wins out of 25 (95.83%).

Fusion were beaten only once all season – 5-4 by Fulham Brunswick back in December. Fulham went on to finish second, just ahead of Urban III on match ratio, six points behind Fusion.

Division C4, held at Generation 2, was a close one as WCBTT and Portsea Island II both reach a total of 24 points, winning 12 and losing two. WCBTT took the title on match difference.

It could have been a different outcome – WCBTT were leading going into the weekend, but they were beaten by Greenhouse II in the third of the weekend’s matches, while Portsea were unbeaten across the two days.

Thomas Jeffcott topped the averages, the WCBTT player winning all 18 of his matches.

Division C5 was also held at Generation 2 and it was Godalming Simply Let who took the title by four points from Fusion IV.