North Ayrshire stunned league champions Ormesby in their final game of the season. 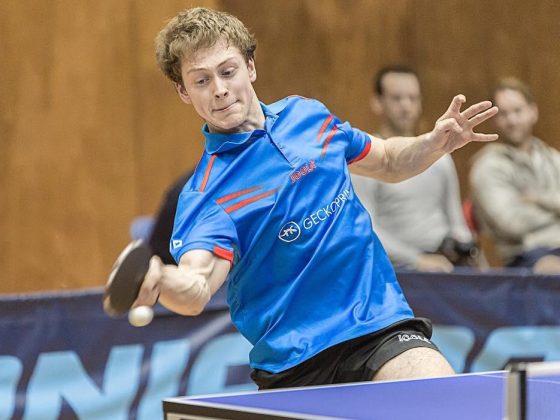 Ormesby travelled to St Matthew’s Academy, Saltcoats looking to end the season unbeaten having secured the league title just a week earlier. Ryan Jenkins lined up with Ben Savage and Adam Webster, with both Savage and Webster making their first appearance this season for the north-east side.

Needing a comprehensive victory to leapfrog Ormeau who started the day in second spot the NATTC trio got off to the perfect start as Colin Dalgleish beat Savage in three.

Ryan Jenkins beat Chris Main, again in three, to level after two matches and cast doubt over the home side’s hope they could pull off the win needed to climb above Ormeau.

A thrilling back and forth affair followed in the doubles as Dalgleish and Martin Johnson took on Jenkins and Webster. Dalgleish and Johnson led after three, with the Ormesby duo forcing a fifth thanks to a determined 12-10 win in the fourth. The fifth was just as close, Dalgleish and Johnson just doing enough to win 12-10 and set the tie up at 2-1.

Johnson then beat a plucky Webster in four as Dalgleish beat Jenkins in three to move the score line to 4-1 and ensure North Ayrshire remained in with a shot of moving up the table at.

Savage was beaten in three by Johnson before the match of the day took centre stage as Main took on Webster. The north-east player once again proved a tricky opponent, forcing the final match to five. Webster twice fought back from one set down to ensure a final set was needed. That went the way of Main, 15-13, to give North Ayrshire victory and second place in the division.

One final match remains in the SBL Premier Division, with BATTS and travelling to Urban TTC on Saturday 21st May. The fixture from the bottom half of the division is due to get underway at 14:00.