My journey to the Birmingham 2022 Commonwealth Games

Kelly Sibley talks about her journey to her first Commonwealth Games as England Women’s coach. 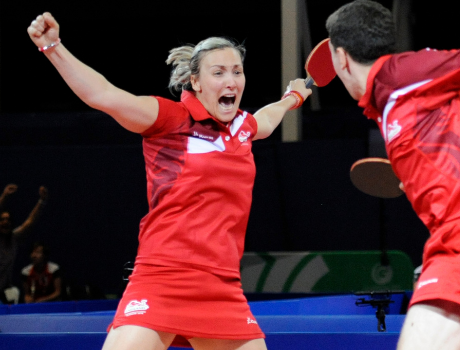 Today marks 100 days to go until the biggest multi-sport event in the UK in a decade – the Birmingham 2022 Commonwealth Games!

As England Women’s Coach, I get to prepare our female athletes for an incredible Games and experience the Commonwealths as a coach rather than a player.

I’d like to use the 100 days to go mark as an opportunity to tell you about my journey as a player at the Commonwealths, how I transitioned to coaching and what I’m hoping to get out of the Birmingham 2022 Commonwealth Games.

I love table tennis, and it’s given me so many opportunities and great experiences. I think it’s important to give back. I’ve always wanted to go into coaching after I finished playing professionally and I’m looking forward to trying to help and inspire women and also the younger generation. I’d love to be able to try and get more women and girls getting involved with the sport too as a result of the Commonwealth Games in Birmingham.

I was lucky enough to be involved in coaching during my last couple of years while I was still competing. During this time, I attended the coaching courses that were held in Birmingham and got my qualifications.

I found the courses really enjoyable and it was great to meet other coaches where we could learn from one another and share ideas with each other.

During my time coaching I’ve found that I’ve learnt a lot already in such a short space of time, and some of the things I know now I wish I knew when I was playing!

I’ve learnt how to set practices in a more challenging way, and have been working on learning about deliberate and purposeful practice and also about athlete mindset.

One thing I really like is that you can always learn no matter what stage of the coaching journey you’re at.

I’ve had a lot of different experiences from my playing days, some good and some bad, but I feel that every experience has a learning curve. I feel like I can use all these experiences and share my knowledge on how to deal with these with the team.

I’ve competed in major competitions and I’ve also been lucky enough to compete in multiple multi-sport games, so again I’ll be able to sit down and chat to the girls about what to expect so when they get to the event they aren’t overwhelmed.

I feel I bring passion, energy, resilience and of course my table tennis experiences to the team. I’ve always felt that the England women have had great team spirit on and off the table in the past (especially on the team bench) and this is one thing I’m really keen and focussed on carrying on.

Preparations are going well so far, we’ve held monthly training camps at the University of Nottingham and we’ve got some future camps planned as well as some competitions abroad.

Once the team is selected I’m really looking forward to spending some really good quality time together where we can really push forward and work on the finer details as a team and really cement that team spirit that we’re so famous for.

Both of the Commonwealth Games medals I won mean a lot to me but for different reasons. Glasgow was truly amazing and to win my first Commonwealth medal after a couple of near misses in previous Games was such a wonderful feeling. To win it with Danny Reed in the mixed doubles to complete the England clean sweep in that event was just amazing. To win my first medal with my friends and family there just made it extra special.

The most recent bronze medal at the Gold Coast in the women’s team is just as special as this had been a goal of ours for the last couple of Commonwealth Games and we had previously just missed out.

To go one better and finally win that team medal was such a wonderful feeling, and it really was the best way for my playing career to come to an end.

To represent your country in a home Games is truly fantastic, and I was lucky enough to experience this at London 2012. Whether you’re a coach or player, to put on that England shirt and walk out into that arena is such an amazing achievement and I’ll be just as proud going there as a coach just the same as if I were a player.

I wish all the Team England athletes the best of luck at the Commonwealth Games! It really is an amazing competition and I’m super excited to see what the competition brings for us.