Moregard ‘puts a hex’ on opponents with eye-catching bat 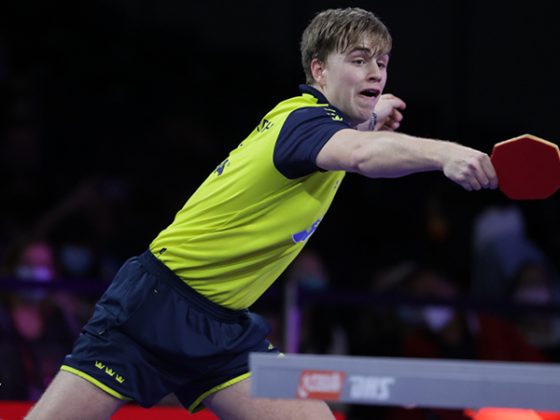 The 19-year-old has come through some amazing battles in the bottom half of the draw and will face top seed Fan Zhendong of China for the gold medal at 1am tonight UK time. Click here to watch on the WTT website.

Unseeded and ranked No 76 in the world, he started with a routine 4-0 win against Ahmed Saleh of Egypt, before successive 4-3 victories over 20th seed Chuang Chih-Yuan of Chinese Taipei, Germany’s 10th seed Patrick Franziska (13-11 in the decider) and unseeded Lim Jonghoon of South Korea, against whom he came from 3-0 down to win.

A 4-2 victory over 13th seed Quadri Aruna of Nigeria followed, before Moregard sunk eighth seed Timo Boll in the semi-finals as he came from 2-0 and 3-2 down to defeat the German superstar in yet another decider.

His bat is a new design unveiled by Stiga and has caught the eye amost as much as Moregard’s all-action performances, building on his recent victory at the WTT Contender Budapest – and his men’s doubles title at the Czech Open, alongside Sam Walker.

England star Walker said: “The bat’s a new thing and I’ve not tried it, and I won’t be trying it as I’m not a Stiga player. I can’t say how much difference it’s made. It may be more of a marketing thing.

“I’m not sure it’s much to do with the bat and it’s more to do with the fact he’s a very, very good player. He’s had quite a good draw, though still pretty tough, but he’s taken his chances. I’m happy for him and I hope he wins.

“I know him well and I like him – he’s a nice lad. He’s obviously got a lot of quality and he’s very strong mentally, especially for his age. Yes, it’s a surprise he’s in the final, but I don’t think it’s too surprising he’s got to where he has because he’s done well this season and he’s a world-class player.”