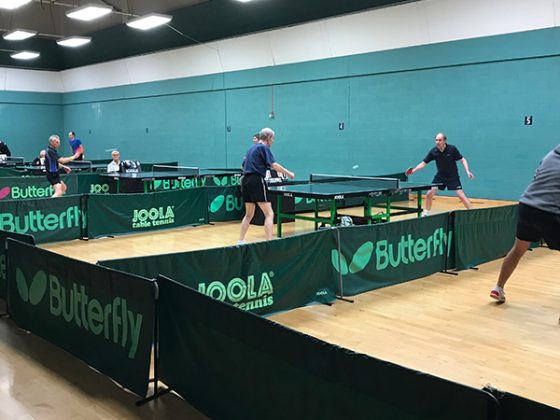 A massive week for the sides at both ends of the table with MK teams Spinners and Pumas coming out on top over their closest rivals.

A welcome return to form by Jecu Aurelian after an indifferent February (just 6 wins from 12) enabled Spinners to overcome their perennial rivals in the title chase (in this millennium anyway) Greenleys Monarchs 6-4 in a classic match on Wednesday. Monarchs have dropped fewer points than Spinners against the other teams in the Division, but all 3 defeats now against Spinners have surely cost them the title, with only 4 weeks of the season remaining. Jecu successfully saw off Tomek Nowakowski and Magda Kosubek but found Roumen Stefanov, the Northants star on Monarchs debut, a win too far in his last outing of the night. As usual in these tight matches, the doubles set proved vital with Jecu partnering Alan Cherry to a victory over Tomek/Magda. Alan, newly crowned League Singles champion from the weekend, was impregnable as usual for his hat-trick and relishes these important contests which always bring out his best form. Gary Jones made up the Spinners trio and played well without success.

Meanwhile, at the other end of the table, MK Pumas pulled off a vital 8-2 win over relegation rivals Leighton Buzzard Van Hire. It was a great night for Andy Smith and Hakan Karaagac, both with maximums and a share in the doubles to earn Pumas’ first victory since the opening week of the season, way back in the Autumn. Julie Snowdon picked up their other set with a win over David Broome to avenge her defeat last time they met. Paul Haigh and Fabrice Spelta were the other Van men and no set went to a deciding game. A 5 point margin with a match in hand should be enough to ensure Pumas finish clear of bottom place now.

The remaining match was a late night marathon with Greenleys Kings beating club-mates Warriors 7-3. Jordan Moss had to shoot off early and was allowed to play her sets first off first She started by losing to Ricky Taiwo but went on to good wins over Adebola Odetayo and Darren Ward. Warriors other successes came courtesy of Ricky and Darren at the expense of Guy Sparrow, which left Kings’ skipper Nick Howard unbeaten after surviving match points against Darren. The clash between Nick and Ricky brought together two of the in-form players in the League with Nick ending Ricky’s impressive recent run of wins in straight games.

Player of the week : Alan Cherry

BIG WIN FOR BIG JOHN
Greenleys Glory put in a sensational performance against League leaders MK Phoenix this week, losing 6-4 without the services of their main man Jacob Midson for the first time this season. John Stamp, tallest player in the Division, stepped up to the plate with a terrific shift to beat both Terry Lau and Mervyn Phillips and then team up with Scott Dixon to take out the Mervyn/Alan Bolding combination. Scott added a 4th after beating Terry and narrowly missed out on forcing the draw when going down 11-9 in the decider against Mervyn. There was no stopping Alan though, in singles combat anyway, as he extended his winning streak to 28. Christine Scaysbrook was the other Glory player. Glory have the best doubles record in the Division and the John/Scott duo are heading the doubles averages to boot.

Open University Primes crashed to their biggest defeat of the season against MK Topspin, who gained more ground on Phoenix after a 9-1 success. Ning He prevented the whitewash in the final set by beating Russell Penn in straight games, while Russell’s team-mates Mervyn Kelly and Tanmay Tijare walked away with maximums. Half the sets went the distance though. James Zeng and Andy Tan also played for Primes.
A convincing 8-2 win for MK Powers over MK Hit ‘n’ Hope has put them in the mix for 3rd spot as only a single point now separate them from both the Glory and Primes sides. Hat-tricks here for Sarah Hudson and Minesh Pitamber and a single win for Keith Carrington. Hope’s Mike Ainsworth and Paul Tompkins both triumphed over Keith and while Andy Frearson remined winless, he did at least take Sarah to a 5th game, the only one on the night.

Finally, Leighton Buzzard Avengers beat bottom side Chackmore Hasbeens 7-3 to strengthen their hold on 6th position. Bernie Raffe was man of the match with a maximum with wins against Bub Burman and the Whiteheads, Chris and Andy. Bernie also took the doubles partnered by Richard Hardy, with Christinel Hulpan taking a brace for the first time, and Richard one. Hasbeens’ sets came from Bub (2) and Andy. That’s 6 doubles defeats in a row now for a team that previously punched well above it’s weight in that department.

Player of the week : John Stamp

Courtesy of Martin Johnson
This was the week of “the big match” at the top of Division 2, as leaders Milton Keynes Sharks visited second placed Woburn Sands Mosquitoes, who were six points behind but with a match in hand, to play each other for the third and last time this season. Sharks had won the previous two encounters, 6-4 and 7-3, but their lead at the top has gradually been narrowed over the last few weeks. The expected close match ensued, with five of the ten sets going to a fifth leg, all of these finishing with a narrow win one way or the other, however perhaps the bigger surprise was that neither team had their most successful player playing, with unbeaten James Molloy absent for Mosquitoes, but Derick Rodrigues also absent for Sharks. The close sets happened right from the off, with Rob McPheat going 2-0 up for Mosquitoes against Ruper Greyling, only for Rupert to level it up a 2-2, but in the end it was Rob who just edged through at 11-9 in the decider. In the next set, Pedro Anastacio came from 2-1 down against Andy Jenkins to take an even closer deciding leg, 12-10 in the fifth. Glenn Barcham put Mosquitoes back ahead, winning in four legs against Abhay Tijare, despite dropping the second leg, 1-11, but the match was all square again as Pedro & Rupert effected another win the the fifth in a topsy turvy doubles against Rob & Andy. Sets were exchanged as Rupert beat Andy in four and Pedro took the closest set of the night 16-14 in the fifth against Glenn, whilst Rob and Andy each defeated Abhay more comfortably. At 4-4 and it was yet another five leg set, in which Glenn pulled back from 2-0 down to Rupert, only for Rupert to seal it 11-8 in the decider. The full set of wins over Mosquitoes beckoned, but Rob held off Pedro in a close four games in the final set, to leave the final score 5-5, and so leave the top of the table still very finely balanced. Both teams thus extended their unbeaten run, Mosquitoes to six in a row and Sharks to four in a row, whilst Rob took the individual honours.

Further down the table, Mursley Hawks in fifth took on Little Horwood Wooden Tops in sixth, and it was Hawks who won the match 6-4, although they were helped by the absence of a third Wooden Tops player, leaving Andy Hooper and John Sharp to take on the Hawks trio of David Bartlett, Ian Spanswick and Martin Johnson. Wooden Tops won the first two sets played, as Andy beat Martin over five legs, then John beat Ian in four games, but Hawks captain, David, came to the rescue with narrow fourth game wins over both Andy & John. John picked up another win against Martin, but Ian edged his set against Andy at 11-9 in the decider, whilst Andy & John took the doubles against David & Ian, to be 4-3 up in the sets played on the night, but with no third player, they lost the match 6-4, to leave them 18 points adrift of Hawks in the table.

The final match of the week pitted third placed Newport Pagnell Lagondas away to fourth placed Leighton Buzzard Spitfires. Glen Davison took the opening set against Graham Silversides for Lagondas, and then Chris Horn won the third set against Dwight Edwards, to temporarily put Lagondas 2-1 up at that point, but that’s as good as it got for them. Michael Howard made his debut appearance on the table, this season, but his lack of practice told as he lost all three, although he went close against Dwight, just losing out 11-7 in the decider. Andy King put in a majestic performance to win all of his sets for Spitfires, also winning the doubles with Graham against Glen & Michael, and with Dwight and Graham each winning twice, Spitfires picked up their third 8-2 win in four weeks, a run of results which sees them overtake Lagondas for third spot, and move to within six points of second placed Mosquitoes.

Player of the Week : Andy King