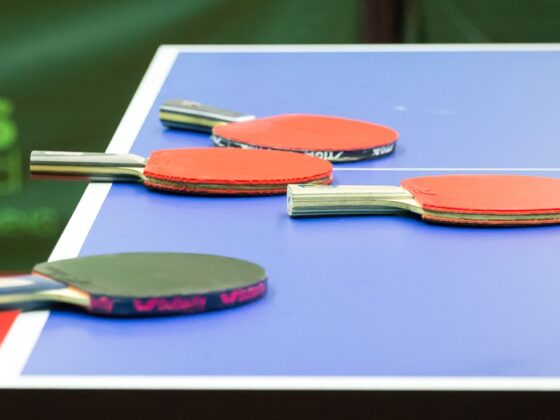 This week brings to a close the 2nd round (of 3) of fixtures with MK Spinners out in front, 15 points clear of Greenleys Monarchs, despite them having accumulated more points against the other 5 teams in the Division.  But 9-1 defeats twice over against the leaders has cost Monarchs dear in the title race.

MK Spinners struggled this time against lowly club-mates Pumas with Tim Cheek, who has been outstanding this season, hampered by a leg problem.  After beating Chris Belton, Tim went down to fellow chopper Andy Smith and then conceded to Hakan Karaagac. Hakan had beaten Jecu Aurelian in a bright opener, coming back from a 2 games deficit, and Pumas picked up a valuable 4th set with a magnificent Andy win over Jecu to lift them off the bottom of the table.  Usual hat-trick for Alan Cherry.

Greenleys Monarchs, meanwhile, enjoyed an 8-2 success over stable-mates Warriors with a treble from Dave Beddall.  Warriors skipper Ricky Taiwo started and ended the match with a win but lost to Dave in-between.  Perhaps the most striking feature of this match was the number of sets needing a decider, which was 6, with the first five of them won by Monarchs before Ricky stopped the rot in the final set.  I seem to have jinxed players by the mere mention of their record runs in these columns.  Last week it was Alan Cherry and Guy Sparrow.  This week was the turn of Monarch’s Magda Kozubek, crashing out to tricky Ricky ‘at the death’ after 14 previous wins, having somehow survived a close 13-11 in the 5th battle with Darren Ward earlier after being 2 games down.  For Ricky, that win took him to 27 for the season, and no-one has more in this Division. Martin Hall played for Monarchs and William Egbuna was the other Warrior.

A blackwash defeat to MK Sasaki left Leighton Buzzard Van Hire bottom of the pile.  Hat-tricks all round for Michael Wilkins, his first of the season, William Kit Liang and Nicolas Wong.  Only one set was close with Paul Haigh taking Michael to 13-11 in the 5th. Bernie Raffe, playing up from Division 1, and David Broome were the other Van men.

Player of the week : Ricky Taiwo

Very one-sided affairs to end the 2nd cycle of matches for the season as the top 4 sides displayed their dominance.

First up, leaders MK Phoenix trounced club-mates Powers 9-1 with hat-tricks by Alan Bolding and Terry Lau plus a brace from Mervyn Phillips, who lost to Jiten Pitamber in straight games.  This was Terry’s first treble of the campaign while Alan extended his unbeaten run to 19.  Keith Carrington and Clare Styles played for Powers.

2nd placed MK Topspin took themselves a step nearer to Phoenix with a whitewash over bottom side Chackmore Hasbeens.  This was the second 10-0 result in the Division this season, both involving Hasbeens, and a satisfying revenge for Topspin for their shock defeat by the bottom placed team first time round.  The match also brought together two of the three remaining players with 100% appearance records this season, Russell Penn and Andy Whitehead.  Mervyn Kelly and Tanmay Tijare played alongside Russell for Topspin with Sam Willett and Chris Whitehead accompanying Andy for Hasbeens.  Despite the scoreline an obdurate Sam went to deuce in the 5th twice over, firstly against Tanmay (losing from 10-6 up) and then again in the final set to Russell.

Open University Primes, in 3rd position, saw off MK Hit ‘n’ Hope 8-2 thanks in the main to a fine treble from Charity Wong, her first of the season.  Ning He and Andy Tan chipped in with a brace a-piece, both losing out to Ivor Howard.  Ivor was involved in two 5-gamers, beating Ning deuce in the 5th then losing to Charity 11-8 in their decider.  Mike Ainsworth and Andy Frearson were the other Hit ‘n’ Hopers.

Greenleys Glory completed the top 4 monopoly with a 7-3 success over Leighton Buzzard Avengers.  As usual, Glory’s Jacob Midson and Avengers’ Alex Du Noyer delivered for their teams and were well matched too in their own encounter, won 11-9 in the 5th to ensure Jacob’s hat-trick and deny Alex his own.  Richard Hardy picked up Avengers’ other win with an 11-9 in the 5th success himself over Christine Scaysbrook.  John Stamp hit a brace for Glory and Chrisinel Hulpan was the remaining Avenger.

Player of the week : Terry Lau