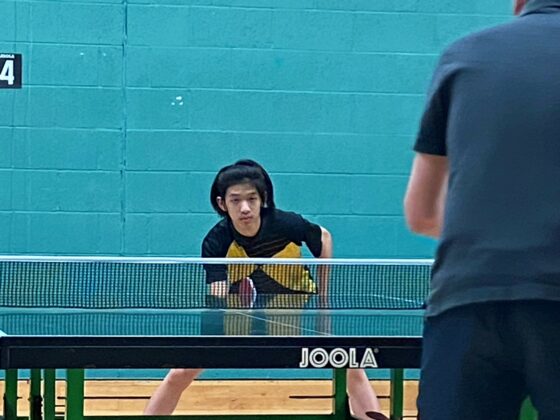 New champions MK Spinners, who sewed up the title last week, took on colleagues Pumas in this final week of another great season.  The 6th placed team’s star man Hakan Karaagac continued to impress with a brace when inflicting heavy defeats on both Jecu Aurelian and Gary Jones, but that was the extent of the Puma challenge as Spinners ran out 8-2 winners with another hat-trick for skipper Alan Cherry.  Julie Snowdon and Chris Belton appeared for Pumas.

Runners-up Greenleys Monarchs actually won more points than Spinners from the other 5 sides in the division (111 to 107) but their title challenge was scuppered by a poor record in the meetings between the top teams.  Monarchs finished their season with a 7-3 victory against club-mates Warriors. Tomek Nowakowski was in fine form for his maximum and enjoyed good support from Dave Beddall (2 wins), who he also took the doubles with, and Martin Hall (1). Warriors finished in 5th spot with only 4 wins but a chestful of draws to their name. Skipper Ricky Taiwo had a terrific season with another couple of wins here to bring his total to 41, well ahead of his nearest rival.  Darren Ward picked up his side’s third win when beating Martin.  Adebola Odetayo was the other Warrior.

This just leaves Greenleys Kings, winners of the last campaign and without a match this week, to account for.  They finished in 4th place, a considerable feat considering they languished in bottom spot at Christmas before putting in a strong second half showing which lifted them up the table.  Many thanks to their skipper Nick Howard for his witty match reports.  Always generous to the opposition and immodest about his own achievements, they were a good read and a valuable source of information for this column.

Player of the week : Tomek Nowakowski

Player of the season : Ricky Taiwo

This is the last round of matches and many congratulations go to this year’s champions MK Phoenix, who secured the title with a 7-3 win over club-mates Powers to gain promotion to the Premier League and the right to rub shoulders with the local elite next season.  Needing just 4 points, they didn’t waste any time in getting them, rattling off those vital sets right at the start, including the doubles which has been a bugbear for them of late.  Phoenix have been here before, winning the Division last time they played at this level in season 2018/19.  Well played Alan Bolding, his standard hat-trick extending his winning run to 37, Mervyn Phillips (a brace) and Terry Lau (one). For Powers, Minesh Pitamber chalked up a brace himself and Sarah Hudson one.  Keith Carrington was the other Power player.  No sets went the distance.

Second placed team MK Topspin had no fixture this week but were never in danger of being overtaken, leaving the 3 teams immediately behind locked in a battle for 3rd place with, in my view, all having an equal chance of achieving that goal.  However, in a tight finish, the honour went to the incumbent side Powers, who just managed to hold on.  Although finishing level on points with Greenleys Glory, they took the spot by virtue of greater number of matches won throughout the season.  Glory had struggled this week against Leighton Buzzard Avengers in the basement of the Forster Institute, slumping to a 4-1 deficit at the break.  A terrific performance here by Alex Du Noyer with a hat-trick, plus the doubles with Bernie Raffe, who supplied the fifth point with a singles win to deny the Glory boys.  In a fine team performance Richard Hardy was the luckless third Avenger, losing 11-9 in the deciding game twice over.  Jacob Midson and Scott Dixon picked up a brace each for the visitors, who finished 4th, and John Stamp one. Avengers ended up 6th.

Open University Primes were the other side in contention for 3rd spot but ended the campaign 3 points short of their rivals to finish 5th after a disappointing run-in.  At one stage they looked well set for a much higher placement but ended the season badly with no win in 6 and draws in the final two matches against the bottom two teams.  This week they shared the points with 7th placed MK Hit ‘n’ Hope, who included Division 2 man Steve Jordan in their line-up.  This was one of those matches where everyone won once or twice, so no triple winners or losers.  For Hit ‘n’ Hope, Steve and Ivor Howard hit braces and Andy Frearson one.  For the Primes it was a case of a brace from Patrick Wong and a win a-piece from Andy Tan and Charity Wong, the draw only obtained by a last gasp 13-11 win in the 5th win from Charity against Andy F.  Good match all round.

It’s been an excellent season, played throughout in a great spirit and the 8 competing teams relatively well matched with over half the fixtures ending by a 2 point margin or less.

Player of the season : Alan Bolding (the postman who always delivers)