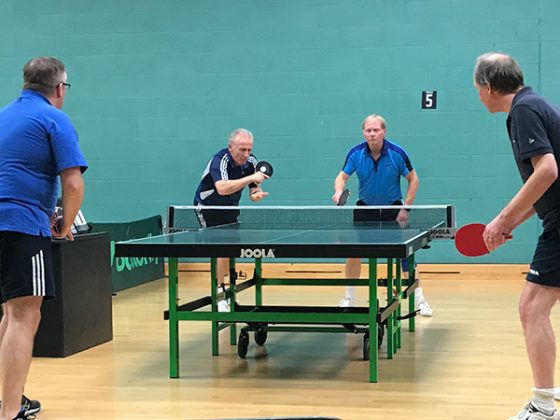 After back to back defeats Greenleys Monarchs returned to winning ways this week with a 9-1 demolition of MK Pumas, who had started the match brilliantly with a Hakan Karaagac straight games win over Martin Hall. But Pumas peaked too soon. That early win was the extent of their success as blanks for Andy Smith and Julie Snowdon followed while Monarchs’ Magda Kozbek, unbeaten in 3 matches now, and Tomek Nowakowski walked away with maximums. The result means that while Monarchs move to within 20 points of leaders MK Spinners, who had no fixture this week, Pumas sink to the foot of the table.

A mid table meeting of two teams on the same number of points featured the last two title winners, with current holders Greenleys Kings coming out on top over MK Sasaki. Michael Wilkins, sole surviving member of Sasaki’s 2019 championship team, drew a blank here with hat-tricks logged by in-form Nick Howard and Guy Sparrow in Kings’ 7-3 success. Nick got off to a slow start, recovering from large deficits against Michael, picked up nicely when featuring in the longest set of the season while sharing 122 points with Nicolas Wong (Nick with 62), and ended in style with an orthodox straight games win over William Kit Liang. Unpredictable Guy extended his current run of wins to 8, the same number acquired from his first 25 sets of the season. Is Guy getting ready to go on another one of his amazing runs again, the like of which have only been emulated by Alan Cherry and Matt Haynes in this Division this century? Only time will tell but there should be an intriguing clash next week with Alan which will go a long way to answering that one. Watch this space. Nicolas and William both beat Kings’ Iain Lindsay and Sasaki took the doubles.

Leighton Buzzard Van Hire lifted themselves off the bottom by upsetting the form book against 3rd placed Greenleys Warriors. Van Hire got off to a flying start and were 4-1 up at half time before hanging on to win 6-4 in the final set, appropriately played out between each team’s star man, draw specialists Warriors unable to hang on this time. Biao Wang and Ian Doughty picked up 2 wins each for Van Hire, with Paul Haigh (1) crucially sharing a doubles victory with Biao. For Warriors, Ricky Taiwo and Darren Ward also had 2 wins a-piece with Div 1 substitute Dan Englander missing out.

Player of the week : Guy Sparrow

In the big match this week MK Topspin triumphed 7-3 over leaders MK Phoenix to move into 2nd place in the table. Earlier this month Topspin slumped to 5th after defeat against the bottom side but are now looking the strongest team in the division and genuine challengers for the title. What a difference a few days make! Mervyn Philips was in great form for Phoenix with a terrific hat-trick against the a trio of Russell Penn, Mervyn Kelly and Tanmay Tijare, with just a single game dropped. Terry Lau lost two 5-game sets though and Gerald Ridgway went down 11-9 in the 5th to Russell after winning the opening 2 games, so Topspin won the close encounters.

A rare outing these days for long time MK Powers’ skipper Peter Tillotson saw his team crash to their heaviest defeat in this division since a 1997 blackwash to Topspin. Open University Primes’ 9-1 win puts them 3rd, ahead of Powers who slump to 4th place from 2nd. Primes had lost their last 2 matches but bounced back well to record their own biggest win of the season. A whitewash looked to be on the cards too, but was saved by Keith Carrington in the final set against James Zeng. Great hat-tricks here for Andy Tan and Ning He and well played both. Joining Peter on a blank night was Jiten Pitamber. Like the previous match, several sets went the distance with every one of them taken by the winning team.

Scott Dixon was 5th placed Greenleys Glory’s hero in their 6-4 win over bottom side Chackmore Hasbeens, logging a maximin against Bub Burman, Andy Whitehead and Sam Willett. Bub and Sam were in good form themselves with victories over Jacob Midson and Christine Scaysbrook, Christine taking Bub all the way to 12-10 in the 5th. Andy Whitehead remained winless for Hasbeens. Perhaps the big shock here was Bub and Andy’s first doubles loss (excluding their matches with Phoenix) of the season after 9 wins. In straight games too, though all going to deuce, against the Jacob/Scott combo.

Finally 6th placed Leighton Buzzard Avengers went down 6-4 to MK Hit ‘n’ Hope, in 7th, despite an Alex Duyer hat-trick. Alex also took a share in the doubles with Bernie Raffe, as Bernie and Christinel Hulpan remained winless in singles against the Hit ‘n’ Hope trio of Paul Tompkins, Marco Hahn and Ivor Howard, who notched up a brace of wins each.

Player of the week : Mervyn Phillips