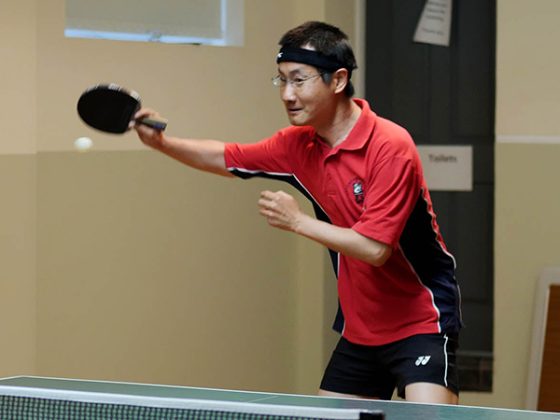 With no fixture for leaders MK Spinners this week a big win by Warriors would have taken them to top spot. But their sixth placed opponents Leighton Buzzard Van Hire had different ideas and forced a magnificent draw at Greenleys. Biao Wang was their star man here. After straight game wins over Darren Ward and Ollie Horswell, Biao faced the very much in-form Ricky Taiwo in the final set with his side in arrears and duly squared the match with a terrific 4-game win. Vital support was provided by Fabrice Spelta with a singles victory over Darren and a share with Biao in a one-side doubles. Rick and Ollie each bagged a brace for Warriors and Darren one. Paul Haig was the other Van man.

Greenleys Monarchs seem to be specialising in 9-1 scorelines, both for and against, this season with MK Pumas on the receiving end of this one. After Hakan Karaagac had given Pumas the lead, in a deuce in the 5th tussle with Tom Nowakowski, it was all downhill for the promotees from the last campaign. Magda Kozubek and ace defender Dave Tiplady, on seasonal debut, both enjoyed hat-tricks. Andy Smith and Chris Belton also played for Pumas.

Neil Bigrave of MK Sasaki hit his first treble in the League since 1996, though this was only his third match back after a 25 year lay-off. Sasaki ran out 6-4 winners against bottom team Greenleys Kings with contributions from Neil’s team-mates William Kit Liang (2) and Nicolas Wong (1). Kings’ successes came from Parveen Garg (2) and Jordan Moss (1) plus the doubles. A blank here for Guy Sparrow.

Player of the week : Biao Wang

DIVISION 1
CLOSE MATCHES THE ORDER OF THE DAY AGAIN

Results this week have returned to the 2-point margins of the opening fortnight and the Division is all the better for providing close matches once more.

Leaders MK Phoenix beat my MK Topspin side 6-4 with Alan Bolding in outstanding form, easily winning his sets and dominating the doubles. A win a-piece from Terry Lau and Gerald Ridgway was enough to take them on to victory. Russell Penn and I picked up 2 each for Topspin leaving recently in-form Mervyn Kelly with a blank.

MK Powers maintained their 100% record with a 6-4 win over Open University Primes. Struggling to put out a side, Powers gave a debut to Division 3’s Rupert Greyling, who grabbed his chance to shine with both hands by beating Charity Wong and Ning He. A tantalising treble looked a certainty against James Zeng when 2 games to nil up but there was no fairy tale ending as James just managed to nick the final set at 12-10 in the decider. Well played to Rupert though, ably supported here with a treble from Minesh Pitamber and a single from Clare Styles beating Charity.

A terrific Ivor Howard hat-trick at Leighton Buzzard Avengers enabled MK hit ‘n’ Run to come away with a good 6-4 win. His victims were Christinel Hulpan, Alex Du Noyer and Richard Hardy. Paul Tompkins (2) and Marco Hahn (1) provided the back up. In a close match where half the sets went the distance Alex picked up a pair and Richard one win.

Chackmore Hasbeens may be stranded at the bottom with all matches lost but they got their equal best result here with 4 set wins against Greenleys Glory. Sam Willett came in for his first match of the season and beat Christine Scaysbrook to add to a brace by Bub Burman and the regular doubles success from Bub and Andy Whitehead. Christine opened her winning account this campaign against Andy with Jacob Midson notching a hat-trick and John Stamp a pair.

Player of the week : Alan Bolding