Medals for Karabardak and Heaps 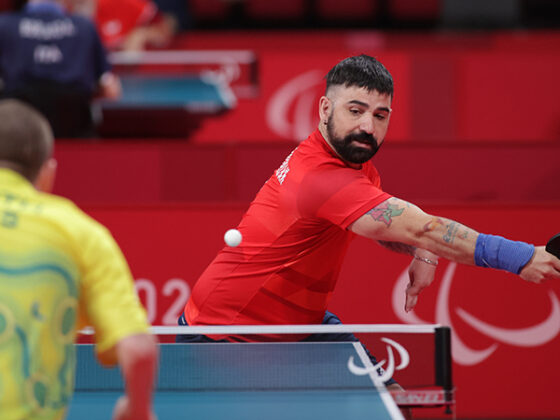 Karabardak (pictured above) was a 3-0 winner against Leonardo Arnold Correa from Brazil and a 3-1 winner against Ignacio Hernan Torres Orostica from Chile. As group winner he received a bye into the semi-finals where he beat Felipe Amorim De Oliveira from Brazil 3-0 which took him through to the final where he faced the two-time PanAmerican champion Matias Nicolas Pino Lorca. The 26-year-old from Chile is a tough competitor and fought back twice to level the match before Karabardak took the deciding set 11-6 to secure the match and the gold.

“I’m really pleased,” said Karabardak. “I thought I played well throughout the competition. I had some really tricky opponents, so I had to be solid and I did that really well. Pino Lorca is a fantastic player and my arm locked up in the third set and I was in a lot of pain. With that in mind I could not be happier to win as it’s always really difficult to win gold.”

Heaps won 3-1 against Mauro Depergola and 3-0 against another Argentinian Fernando Lerman to progress to the semi-finals. He progressed to the final with a 3-1 win against Lucas Carvalhal Arabian but had to settle for silver after losing 3-1 to Elias Romero from Argentina.

“I’m really pleased with how I performed,” said Heaps, who won the European Veterans Para Championship last week. “My confidence on the table is sky high at the moment and I know I can get better. Results are one thing but performance improvement is the thing I will be working hard on. Overall, I’m very happy and continue my rise up the world rankings with points gained by beating two players higher in the ranking list.”

Men’s class 1 was played in a round-robin format and Rob Davies began with a 3-0 win against Vicente Leiva from Chile. He was beaten 3-1 by PanAmerican champion Yunier Fernandez Izquierdo from Cuba and was then involved in a great battle with Fernando Eberhardt in his final match. Davies took the first two sets but the World Championship bronze medallist from Argentina edged a tight fourth set 14-12 to level at 2-2 and won the deciding set 11-8.