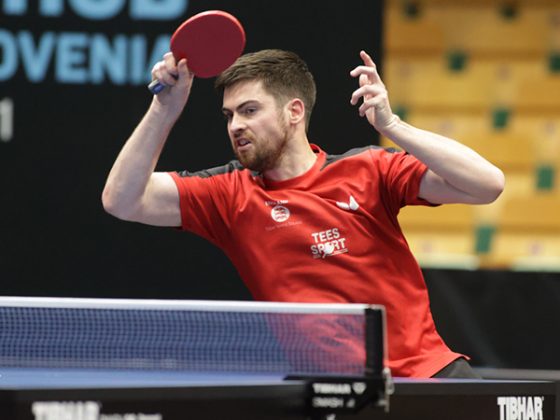 David McBeath picked up a superb win over a top-100 player on his return to international competition at the WTT Contender Lasko event in Slovenia.

The England international had surgery on his right hip last year and proved his fitness during a tight four-setter against world No 93 Brian Afanador of Puerto Rico.

Having lost the first 11-9, McBeath took the next three, including prolonged second and fourth games – in the latter hs saved several game points but also missed match points at 10-9 and 15-14 before taking his third chance to win it 18-16.

McBeath, whose world ranking is currently 573, had earlier betean Adrian Dillon of Austria in his first qualifying round match, in three straight. His run was ended in the third qualifying round by Belgium’s Laurens Devos (WR 221) in four games.

Tom Jarvis is also making his return from an operation on his left hip. He had a bye through the first qualifying round but was defeated in five close games in the second by Mati Taiwo of Nigeria (WR 483).

Paul Drinkhall is seeded 13th and goes straight into the main draw of the competition and will face Slovenia’s Peter Hribar (WR 300) in the round of 32 on Thursday. The winner is likely to face top seed Lin Gaoyuan of China in the last 16.