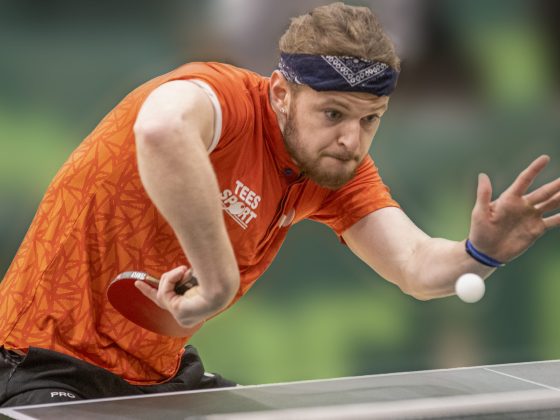 Ormesby were victorious in Friday night’s top of the table clash against Ormeau but were made to work hard for the win.

The Belfast side put up a fight, with success for debutant James Skelton, but the trio who travelled across the Irish sea from Middlesbrough were too strong.

Sam Mabey extended his unbeaten run of singles matches to 8 games, proving to be yet again a crucial part of Ormesby’s winning formula.

The tie got underway with Ryan Jenkins immediately getting the travelling side on the board with a 3-1 win against Zak Wilson. Mabey made it 2-0 in just three games against Ashley Robinson.

Whilst they may have been beaten individually, Robinson and Wilson had other ideas in the doubles. They were too good for the duo of Mabey and Jenkins, beating them 11-9, 11-8, 11-8.

Debutant Skelton then got his SBL career off to a fine start as he beat Benjamin Piggott in three.

With the tie poised at 2-2 it was all to play for as the eventual player of the match Mabey stepped back up to the table.

He struck a crucial blow to Ormeau’s hopes as he came through comfortably against Wilson in three. Skelton was unable to hold off Jenkins who picked up his second win of the evening and confirmed the away side would continue their unbeaten start to the season.

Robinson ensured the scoreline remained respectable for the home side as he beat Piggott in four.

The result puts Ormesby at the top of the table having won all three of their fixtures so far this season. They now have an extended break with an enticing match against the only remining unbeaten side, Archway Peterborough, set for Sunday 23rd January.

Ormeau are back in action on Saturday as they welcome BATTS to Belfast. One other fixture will go ahead as Urban travel to North Ayrshire with the Premier Division starting to take shape.