Looking back at great moments for table tennis 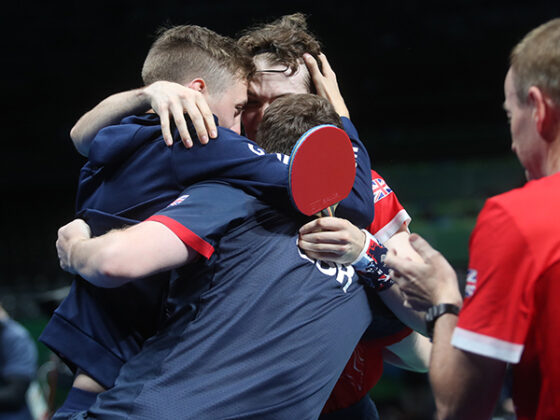 During our Return to the Table campaign this summer we are promoting a Celebration Fortnight which aims to bring the table tennis community together to celebrate the return of table tennis, encourage people back to playing and inspire people who have never played before to give it a go!

Our Ping Pong Parlours initiative was named winner of the Activation Award at the ukactive Awards ceremony, from a shortlist of seven nominees.

The Activation Award category recognises an organisation which has been running an event, campaign or project in the last two years that has inspired and encouraged people to be more active in any setting: whether that be in their home, in the gym or leisure centre, on the way to or at work, or outdoors.

Meanwhile, TT Kidz was one of two projects highly commended in the Generation Active category, which recognises a programme, project or initiative that engages, promotes and sustains physical activity in children and young people – inspiring them to be more active, more often.

British table tennis has been awarded £1.35 million UK Sport funding through to the Paris 2024 Olympics.

The Progression Funding Award is to Table Tennis England to administer on behalf of British table tennis.

It covers the performance pathway rather than any particular individuals, although an element of the award was to be used to help support the delayed Tokyo 2020 Olympic journey, including men’s and women’s singles qualifying events.

Albeit virtually, we were able to celebrate the achievements of table tennis volunteers with our Pride of Table Tennis Awards and recognise their hard work and contributions to our sport.

4. Distribution of play at home sets

Households across the country were introduced to table tennis during the pandemic as we worked in partnership to reach the most isolated and inactive members of our society.

Research commissioned by Sport England shows that older people, people living alone, those with long-term health conditions or disabilities and people in lower socio-economic groups have been less active during covid-19, and the gap between their activity levels and the rest of the populations is continuing to grow.

Working alongside partners in Brighton, Liverpool, Leicester, Barnsley, Westminster, Blackpool, Nottingham, Hull and Richmond, as well as with Rackets Cubed (a charity that provides sports, education and food in areas of deprivation), almost 1,500 ‘Play at Home’ packs were sent to those in most need.

Liam Pitchford, Paul Drinkhall and Tin-Tin Ho all competed at the Tokyo Olympics this summer. Ho’s qualification is momentous for British table tennis as our first woman to qualify in her own right for a quarter of a century, since Andrea Holt and Lisa Lomas-Bellinger represented Great Britain at Atlanta 1996.

Read the athletes’ reflections on the Games here.