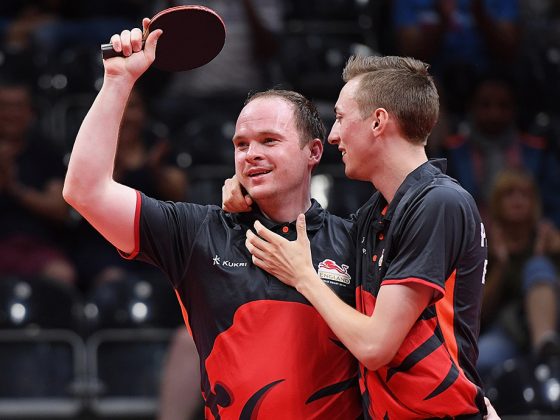 Both pairs have a bye into the last 32 and the clash will be eagerly anticipated by a home crowd.

Sam Walker & Tom Jarvis also have a bye into the last 32, where they will play Kevin Farley & Tre Riley of Barbados.

In the Women’s Doubles, Tin-Tin Ho & Maria Tsaptsinos have a bye into the last 32. There opponents will be Sadia Rahman Mou & Sonam Sultana of Bangladesh.

Charlotte Bardsley & Emily Bolton also have a bye into the last 32, where they will meet Jemimah Nakawala & Judith Nangonzi of Uganda.

In the Mixed Doubles, Pitchford & Tin-Tin Ho are looking to go one better than the silver medals they won at both Glasgow 2014 and Gold Coast 2018.

They have a bye into the last 32 and will play the winners of the match between Izaac Quek & Jingyi Zhou (SGP) and South African pair Shaun Jones & Musfiquh Kalam.

Sam Walker & Maria Tsaptsinos have a tough-looking clash in the round of 64 against Callum Evans & Charlotte Carey of Wales. At the same stage, Tom Jarvis & Charlotte Bardsley will play Geoffrey Loi & Tammi Agari of Papua New Guinea.

The doubles competitions all get under way on Thursday.