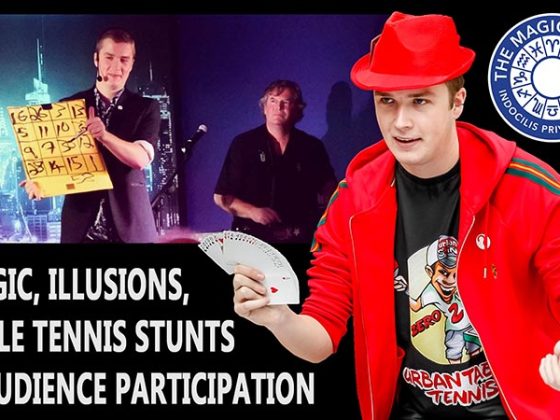 Leon Thomson thinks table tennis is magic – and now he’s proving it by transforming table tennis clubs into theatres to stage his own shows.

Leon, a Level 1 coach and senior county player, is going back to where it all started – Barnet TTC – where a video of him walking through a glass door 10 years ago helped to launch his career as a magician.

Since then, he has starred in his own theatre shows, as well as flummoxing people the world over with his close-up magic.

The covid restrictions of the last two years have led to him creating a magic show which puts table tennis at its heart – and helps to promote the sport and to support local clubs.

The series of three Table Tennis is Magic shows start at Barnet TTC on Saturday March 12, followed by Woodford Wells TTC on April 2 and BATTS in Harlow on April 30.

Leon said: “During lockdown, I did a lot of work virtually but I didn’t get a chance to play table tennis. I missed it so much that the second the clubs opened, I just ran to the club and started obsessively playing.

“So, I started writing this Table Tennis is Magic show. I’d describe it as a table tennis-related story while doing lots of magic tricks, with audience participation, and I’ll do some close-up magic as well.

“It’s aimed at members of table tennis clubs to bring people who don’t play, so we’re trying to promote the sport as well.”

While his stage shows have included table tennis tricks, most small theatres cannot fit a table on their stage, so club settings give him the opportunity to showcase and use the sport to its full potential.

Leon said: “There will be a table in the middle and chairs all around it, so it’s like turning a table tennis club into a mini theatre.

“I’m breaking a few theatre rules – I’m not hiding backstage waiting to be introduced. When the doors open, I’ll do some close-up magic and then people will take their seats for the performance. It’s a unique thing no one else is doing.”

Leon see similarities between the two passions in his life and added: “You need to practise like hell for both of them. The sleight of hand we call magic, you have to practise the same moves over and over again – it’s a bit like multiball in table tennis – but you’re never prepared until you play a match or do a show.

“Barnet is nearly sold out and if the series goes well, I’d like to do it in other clubs. I always try to give some of the proceeds to the club and try to incorporate some fundraising element to it, so it’s not just me making money.

“It’s because of my love of table tennis that I have to do this.”