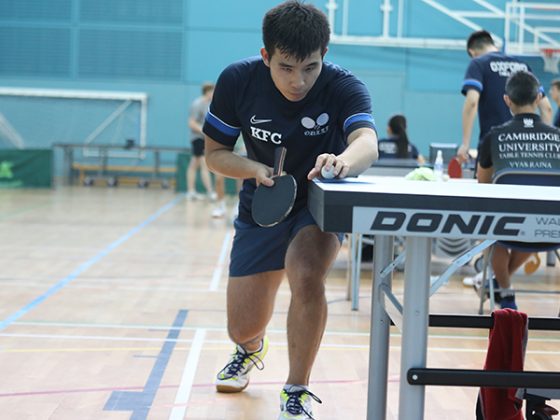 British League player Kin Fung Chan will serve up table tennis as well as fine food when he appears on Channel 4’s hit show Come Dine With Me next week.

The former Table Tennis England Young Ambassador demonstrates his skills with a bat and ball as well as in the kitchen.

And although he is sworn to secrecy about the outcome of the show, he does promise it will be a showcase for our sport.

Kin, a PhD engineering student at Oxford, applied to go on the programme after his housemate spotted an advert on Facebook, and he was selected after online and telephone application stages plus a video interview.

The 23-year-old said: “Instead of going round to people’s houses, it was all filmed in a big farmhouse in Oxfordshire because of covid, and the dining table was really big because they had to socially distance us.

“They really liked the idea that I play table tennis and they were getting me to do all kinds of crazy things. They had me standing in a field doing shadow play, balancing a ball while cooking, doing squats in the kitchen. I may look like a numpty on TV but hopefully not all of it will make the final edit!”

This season, he is playing for East Midlands TTC in the SBL National B (2) division and has won seven of his eight matches so far.

His skills come into their own during the entertainment segment of the show, when he thrills the other diners with a multiball demonstration.

He said: “One of the other guests hit me on the head with a table tennis ball at one point, so I’ll be surprised if they cut that out!

“The filming was fun but very long – you get there for 4.30pm and we didn’t wrap some days until 2 or 3am, so this little 25-minute episode is hours and hours of filming, but they make everything look so streamlined in the edit.”

Kin’s appearance on Come Dine With Me is on Channel 4 at 5.30pm next Tuesday (November 16th).