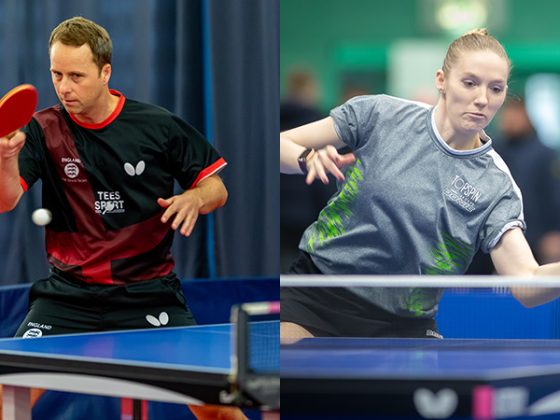 Ryan Jenkins and Evie Collier have been appointed to key roles in British table tennis following an open recruitment process.

Jenkins has been appointed GB Coach, while Collier takes on the role of Admin and Logistics Officer, a role which sits across both the GB and England performance pathways.

Both roles were recruited as part of the creation of a new structure in British table tennis following UK Sport’s £1.35 million investment into the GB performance pathway.

Both new appointments have been involved in performance table tennis for many years. Jenkins competed with distinction on the international stage for Wales, while Collier is a senior England international. Both have begun high-performance coaching careers in recent years.

Collier’s role will support the GB and England programmes and she will work with both the Great Britain Table Tennis Committee, which comprises representatives from all the Home Nations, and Stanforth and the Table Tennis England Talent & Performance Committee.

Jenkins said: “It’s an honour to coach the elite young players in Great Britain. We have some fantastic, talented players to start with and the programme will also develop more players to the required level during the period we are working with the squad.

“Having coached with Wales for a large period, and more recently with the Aspire squad in England, the next natural step is helping shape players in the UK. I can’t wait to get started and make a difference.”

Collier, whose accolades include being awarded a place on the inaugural Women’s Coach Internship Programme (WCIP) at the Gold Coast 2018 Commonwealth Games, said: “I’m extremely excited to start my new role as Logistics Officer with GB and English Table Tennis.

“I’m looking forward to working closely alongside Simon, Matt and the other Home Countries’ Governing Bodies to continue to push the Talent and Performance programmes forward.

“Having worked with a number of the performance coaches in recent years, I am looking forward to continuing my work with them and doing what I can to support current and future table tennis athletes. I cannot wait to get started.”

“Evie brings a wealth of experience in the sport and will provide much needed support to the two programmes.”