Tom Jarvis has been drawn against second seed and world No 32 Marcos Freitas in the first round of the WTT Contender Otocec in Slovenia. 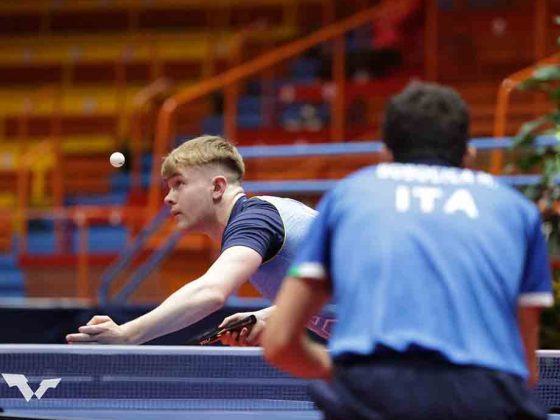 Tom Jarvis has been drawn against second seed and world No 32 Marcos Freitas in the first round of the WTT Contender Otocec in Slovenia.

Jarvis (pictured above), currently ranked at 102, will face the Portuguese as the main draw gets under way on Thursday.

Also in the draw in the last 64 is Sam Walker, who will play Lubomir Jancarik – the Czech player is ranked 15 places higher than Walker at No 76. Paul Drinkhall was scheduled to play but has withdrawn from the tournament.

Walker & Jarvis are combining in the doubles and will face Alexander Chen & David Serdaroglu of Austria in the round of 16.

None of the other English players competing at the event in Slovenia made it through to the main draw.

Charlotte Bardsley (WR 527) won her opening qualifying match in the women’s singles against Blazka Harkai of the host nation and was then defeated in the second qualifying round in four close games by Margo Degraef of Belgium (WR 358).

Maria Tsaptsinos (WR 435) lost at the same stage to Maria Yovkova of Bulgaria (WR 624), while Mollie Patterson, who was due to enter in the same round, withdrew from the competition with injury.

In the men’s singles, Shayan Siraj lost in four on his WTT debut against Choy Chun Kit (WR 574) of Hong Kong.

Tsaptsinos & Bardsley went out in the first qualifying round of the women’s doubles, while Walker & Tsaptsinos were beaten in a tight five-setter at the same stage of the mixed, by Borgar Haug & Rebekka Carlsen of Norway.

Jarvis & Bardsley had a walkover in the first qualifying round and were then beaten in three by Samuel Kulczycki & Katarzyna Wegrzyn of Poland in the next round.