Tom Jarvis & Charlotte Bardsley claimed another superb victory at the Commonwealth Games today as they advanced to the Mixed Doubles quarter-finals. Plus the rest of the news from this morning’s session. 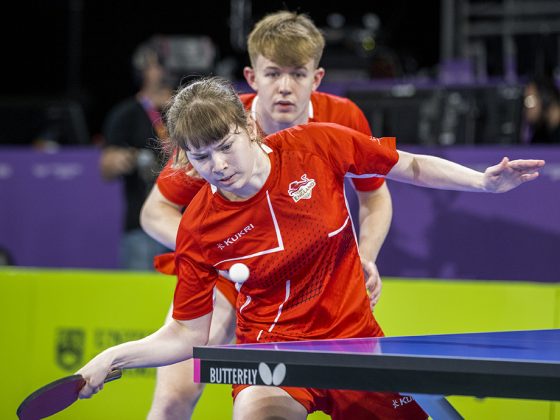 Tom Jarvis & Charlotte Bardsley claimed another superb victory at the Commonwealth Games today as they advanced to the Mixed Doubles quarter-finals.

Up against Canadian pair Jeremy Hazin & Fu Ching Nam, the young English pair (pictured above) lost the first and looked in trouble at 6-10 in the second.

Then they lit the touchpaper with a run of six successive points and rode that momentum through the third to lead 2-1.

The fourth saw them trail 8-3, but they worked it back to 9-9 and then traded game (and in their case match) points with their opponents.

The fifth saw England in charge from the off, changing ends at 5-2 and pulling out to 9-6. The Canadians won the next two points to raise concerns, but when England took the next point in an amazing rally – Bardsley twice levering the ball back over the net from practically on the floor – they had broken their opponents and they sealed it next point.

The quarter-finals are later today, when Pitchford & Ho take on Sharath Kamal Achanta & Sreeja Akula of India, and Jarvis & Bardsley play Nicholas Lum & Jee Minhyung of Australia. The winning pairs will meet in the semi-finals, raising the possibility of an all-England clash.

Meanwhile, Emily Bolton made her long-awaited Games debut as she and Bardsley took on Jemimah Nakawala & Judith Nangonzi of Uganda in the last 32 of the Women’s Doubles.

Bolton was a late replacement for the injured Mollie Patterson and was not used in the team events, leaving the WD as her only chance to step on to court at the Games.

In the Men’s Doubles, there were routine victories in the round of 16 for Liam Pitchford & Paul Drinkhall and for Sam Walker & Tom Jarvis.

The top English pair, who are the No 1 seeds, defeated Tyrese Knight & Ramon Maxwell of Barbados 5, 5, 6 and will face Amadi Omeh & Olajide Omotayo of Nigeria in the quarter-finals at 5.35 today.

Pitchford, Drinkhall and Walker all had their first singles matches and it was a 100% success rate.

Sixth seed Drinkhall had little trouble with the Pakistani athlete Fahad Khawaja, who did win four of the first five points of the match but never hand an answer when Drinkhall found his range.

The final game scores were 6, 5, 3, 4 and Drinkhall will next face Zhe Yu Clarence Chew of Singapore.

It was pretty routine as well for Sam Walker, up against Kevin Farley of Barbados, the seventh seed advancing courtesy of a 4-0 (7, 7, 4, 10) margin. He next plays Jeremy Hazin of Canada.

In the last 16 of the Women’s Singles, Tin-Tin Ho, seeded 12th, was defeated in four by the sixth seed Yangzi Liu of Australia.

The second was the key game, going to 14-12 in the Australian’s favour as both athletes had their chances. Liu will face Wales’ Anna Hursey in the quarter-finals at 7pm today.