Hunter-Spivey to go for Commonwealth gold!

Jack Hunter-Spivey is through to the gold medal match in the Men’s Class 3-5 Singles at the Commonwealth Games in Birmingham, while Ross Wilson, Sue Bailey and Fliss Pickard will play for bronze. 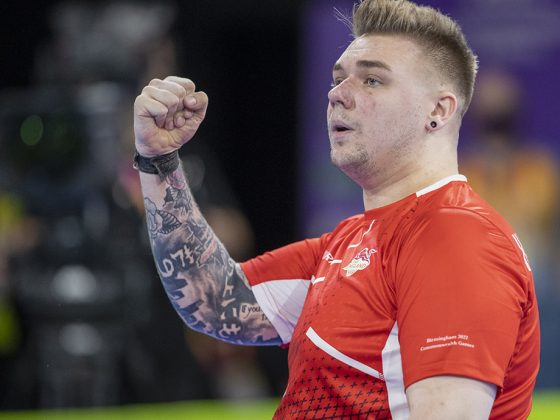 Jack Hunter-Spivey is through to the gold medal match in the Men’s Class 3-5 Singles at the Commonwealth Games in Birmingham, while Ross Wilson, Sue Bailey and Fliss Pickard will play for bronze.

Hunter-Spivey (pictured above, photo by Michael Loveder) took on the 36-year-old class 4 world No 11 from Nigeria, Isau Ogunkunle, and he took the first set comfortably enough 11-4.

But he was made to work hard by the African Championship silver medallist, who had three points to win the second set before Hunter-Spivey edged it 13-11, and the 27-year-old from Liverpool then secured his place in the final 11-9 in the third.

“It feels amazing to be in the final,” he said. “Rushy (coach Andrew Rushton) has known me since I was a kid and if he had told me this would happen when I was younger I would never have believed it.

“I just feel lucky to play in front of a home crowd and be playing very well. It was a tough match and I’ve been in situations before when I’ve been 2-0 up and lost the match by focusing on the wrong things so it shows the experience I’ve got now and the belief in myself after Tokyo.

Hunter-Spivey will play another Nigerian in the final tomorrow, Nasiru Sule, who won their group match encounter 3-2.

“It was close in the group and he beat me but I’ll get revenge,” said Hunter-Spivey. “I think on the first day I felt the pressure of the tournament and that loss was a weight off my shoulders a little bit. I’ve made a conscious effort to enjoy it and focus on the right things so if I can get that win in front of a home crowd and get my revenge that will be even better.”

It was England against Wales in the men’s class 8-10 semi-finals with Wilson taking on his GB doubles partner Stacey in a replay of the semi-final on the Gold Coast four years ago, when Wilson beat the then 18-year-old Stacey 3-1 before going on to take the gold, with Stacey securing the bronze.

The defending champion and Class 8 world No 3 made a flying start today, racing through the first set 11-1 but Stacey, the Class 9 world No 3, came back to take the second 11-6. The third set proved pivotal with Wilson fighting back from 10-7 down to level at 10-10 before Stacey edged it 13-11. The Welshman dominated the fourth set and although Wilson saved four match points at 10-3 down Stacey secured the match 11-7.

Wilson said: “Josh changed tactics at the end of the first set. He changed his receive and serve a bit and although I had 5-3 in the second set I lost a lot of consecutive points without really getting back into it and from there the game turned on its head.

“I don’t think I’ve been very good at adapting here and I haven’t performed to the standard I hold myself to and I’m disappointed in that but I’ve got to learn from it and I will do that. Of course, if I’d won the third set it could have changed the game again.

“Hopefully I can give a better performance in the bronze medal match. I’m representing England and the very least I expect of myself is to give a good performance and I will try my absolute best to bring that bronze medal home.”

Bailey has struggled to produce her best form at these Games and she came up against the Paralympic silver medallist Bhavina Patel in her semi-final. The 35-year-old from India has been in great form this year winning gold in Egypt and Jordan and she was always in control today in a 3-0 win (11-6, 11-6, 11-6) which means that Bailey will play for bronze tomorrow against Sonalben Patel hoping to avenge a 3-1 loss to the Class 3 world No 16 in the group.

“I’m bitterly disappointed with how I’ve played all tournament really,” said Bailey. “She has a very similar style to her sister – she’s very consistent and a very high standard. I saw how she beat Peric and the Chinese number two at the Paralympic Games and even though it doesn’t look as if she is playing big shots she is just so consistent with what she does and uses the pimples brilliantly.

“I just really struggled to find form here but she played very well. I’ll take some time out today and come back fighting tomorrow.”

Pickard had to take on the 26-year-old Australian Yang Qian, the Chinese-born Class 10 world No 2, and the Paralympic champion was understandably too strong in a 3-0 (11-4, 11-1, 11-3) win. Nevertheless, the 27-year-old from Burnley played well and now has the chance to play for bronze against the class 10 Nigerian Faith Obazuaye, who beat her in the semi-final four years ago.

“I knew it was going to be tough due to the classification difference,” said Pickard, “but I came into this tournament to put myself out there so it is what I expected.

“I don’t think the score reflected how well I actually played, particularly in the last set, so I’m pleased with the performance and ready for tomorrow.

“I feel like I’m a different athlete and different person in general to four years ago and I’m really looking forward to getting out there in front of a home crowd and showing what Fliss Pickard is made of.”