Paralympic medallist Jack Hunter-Spivey and Spanish Open champion Joshua Stacey are among a squad of eight British players who will compete in this week’s Egypt Para Open in Ismailia (March 30-April 2). 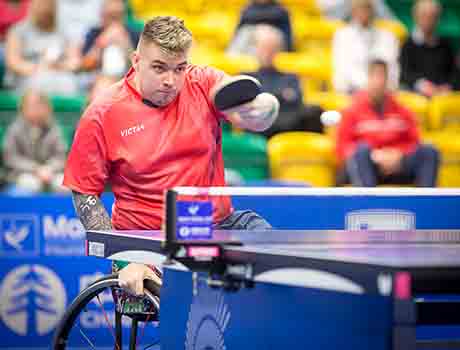 Paralympic medallist Jack Hunter-Spivey and Spanish Open champion Joshua Stacey are among a squad of eight British players who will compete in this week’s Egypt Para Open in Ismailia (March 30-April 2).

Hunter-Spivey (pictured above), who won his first major championship medal last year when he took bronze in the men’s class 5 singles in Tokyo, warmed up for his first international tournament since then by beating Dan Bullen in the Class 3-5 Para Showcase Final at the Marek Bates Ltd National Championships on Sunday and is looking to establish himself as one of the top players in the world in his class.

“I’m really looking forward to Egypt,” he said. “I’m number one seed so I’ve got to go out and prove a point. It was a good result in Tokyo but I can definitely go for that gold now I’ve given myself confidence in what I can do. I’m looking to get into the top four or five in the rankings ready for Paris and the world is my oyster if I get my head down.”

Stacey beat world number two and former Paralympic champion Ma Lin on his way to winning gold in the men’s class 9 singles in Spain, where the British squad made a great start to the season with four gold medals in total.

“I was watching the live stream and it was fantastic,” said Hunter-Spivey. “We’ve got the ball rolling now for the year as a squad and we’re all a big family so hopefully we can carry on the good results.”

Bullen, who won his first international tournament in Costa Rica last December, is also competing in Egypt and was happy to have a warm-up match at the National Championships despite losing 3-0 to Hunter-Spivey.

“This match will help me because in Egypt all the players will be on it from the first ball like Jack, so it has been a really good warm-up match for me,” said Bullen. “Winning in Costa Rica gave me confidence and even playing here today and being able to come back from a not so good first set to be able to battle with Jack in the next two – I’m taking confidence from that especially with Jack being top seed in Egypt.”