How to watch the National Championships today 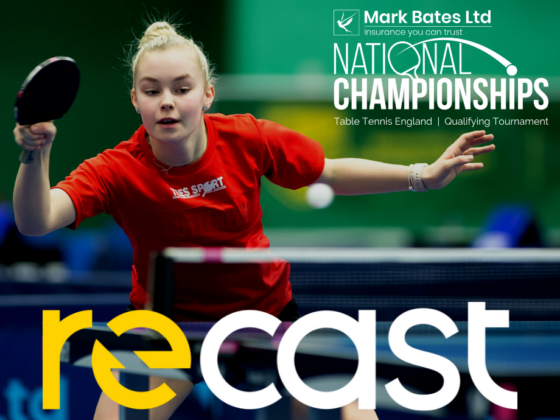 The Mark Bates Ltd National Championships is fast approaching, and you can watch the action live from the University of Nottingham exclusively on our Recast Channel on both Friday and Saturday.

What is Recast and why are we using it?

Recast is a subscription-free live and on-demand streaming platform, which gives fans affordable access to the sports and entertainment they love, whilst rights holders earn directly for every view through micropayments, using the in-app credits called ‘Cast Credits’.

Working with Recast gives Table Tennis England the ability to gain vital revenue by streaming our games on the platform, while giving our supporters access to watch the best fixtures and competitions, and do so in the knowledge that the majority of revenue generated goes directly back to us.

Watch the action live from the under 21’s competition on Friday 25 and Saturday 26th March on our Recast Channel. Games cost between 50-75 Cast Credits (50p-75p), what great value for hours of Championship action! Our supporters also have plenty of options as to how they earn extra Credits to watch the games – watching ads, sharing content, inviting friends to join or by purchasing Credits.

It’s totally free to join Recast and you will receive 100 free Cast Credits when you do, join here.

The matches on the show court on Saturday are as follows:

Click on the graphics below to watch the streams.