Tin-Tin Ho moved safely through her opening Women’s Singles match at the Commonwealth Games, though not without a scare at the hands of 15-year-old Hannah Silcock of Jersey. However, Charlotte Bardsley went out to the ninth seed. 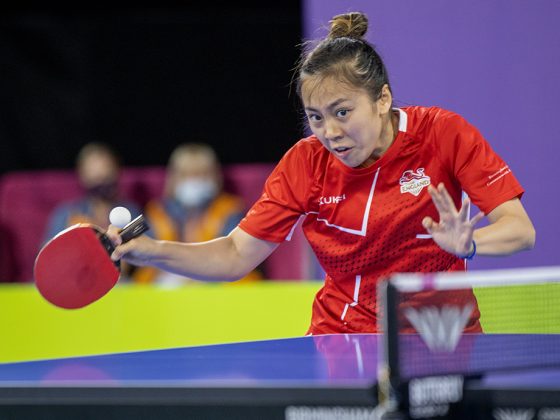 Tin-Tin Ho moved safely through her opening Women’s Singles match at the Commonwealth Games, though not without a scare at the hands of 15-year-old Hannah Silcock of Jersey. However, Charlotte Bardsley went out to the ninth seed.

After two games of Ho’s last-32 match with Silcock, it was all going according to plan as Ho took them for the combined loss of 10 points.

The third saw her lead 10-8 and seemingly moving ahead as expected, but Silcock had other ideas. Mixing obdurate defence with attacking flair – backhand blocks down the line a particular feature – she saved those two game points and another at 12-13, before taking the game 15-13.

It was a tactically savvy performance too from Silcock, who added the fourth game 11-9 to level it up.

Ho (pictured above, photo by Michael Loveder) trusted her game and the Silcock storm blew out over the next two, which she took 3 and 4, though Silcock emerged with much credit, to the delight of her Channel Island cheerleaders in the crowd.

Afterwards, Ho said: “She had an awkward style, her backhand was quite flat. She played really well but I would have liked to close it out earlier.

“I shouldn’t be like that but it is good to be tested.”

Ho will face Yangzi Liu of Australia in the last 16 after she came through in a deciding game against Malaysia’s Ying Ho. The last 16 is tomorrow morning.

Bardsley was up against ninth seed Reeth Tennison of India and she put in a confident display which deserved better than a 4-1 defeat.

The match turned on the fourth, when Bardsley held a 10-7 lead but saw Tennison seize the initiative to win the next four points.

It came after Bardsley had held her own over the first three, including having the toughness to win the second 12-10 having seen Tennison save two earlier game points.

Bardsley said: “It is really frustrating, it was a good opportunity but I missed it. I’ve got the women’s doubles and the mixed doubles still to go so hopefully I can get some results from that.”

Tennison next faces top seed Feng Tianwei of Singapore in the last 16.