Ho eyes landmark title as doubles builds to a finish

Tin-Tin Ho will have two chances to win her 50th national title on Finals Day at the Mark Bates Ltd Nationals after making it into the Women’s Doubles final alongside Maria Tsaptsinos. They will take on Charlotte Bardsley & Emily Bolton. 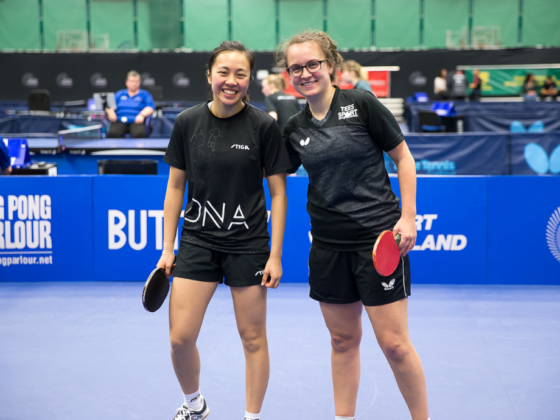 Tin-Tin Ho will have two chances to win her 50th national title on Finals Day at the Mark Bates Ltd Nationals after making it into the Women’s Doubles final alongside Maria Tsaptsinos. They will take on Charlotte Bardsley & Emily Bolton.

Ho has won everything going from under-11 upwards and her next title will see her reach the 50 landmark.

In the Men’s Doubles, Sam Walker & Tom Jarvis will be looking to go one better than two years ago – their opponents will be Joe Ferguson & Chris Doran.

Remember, you can watch the action on the show court on Saturday live on Recast.

Click here to visit the event home page for full details of the tournament. Click here for all the draws and results

Tin-Tin Ho and Maria Tsaptsinos will hope to lift the title they last won together in 2019, after beating Mollie Patterson and Lois Peake in the semi-final, winning 11-8, 11-6, 11-6.

They will face Emily Bolton and Charlotte Bardsley in the final. They beat Jasmin Wong and Densie Payet 3-1 in a cagey affair. The first two sets were split, with neither team looking to press an advantage. Both pairs made errors, but Bolton and Bardsley came out on top. They won 11-9, 9-11, 11-8, 11-6.

Payet and Wong eased into the semi-final with a win over the double left-handed combination of Evie Collier and Erin Green. The third seeds coming through 11-9, 11-3, 11-6.

The pick of the first-round matches saw Morris and McMullan come from two sets down to beat Anna Green and Megan Jones. After losing the first two, the left-hand, right-hand combination of Morris and McMullan started to find their form. At 2-2, they missed two match points to take it to 10-10. After a strategic timeout, they won the next two points to take the match 3-2 (6-11, 11-13, 11-9, 11-6, 12-10).

Despite her heroics in the women’s singles groups yesterday, Saskia Key couldn’t repeat it in the doubles as she lost in the first round with Tiana Dennison to Baldwin and Marriott. The final score was 11-5, 11-9, 11-8.

Payet and Wong were able to overcome their disappointments in the women’s U21 tournament to make light work of their first-round match. They beat Eva Eccles and Stefania Popa 11-5, 11-5, 11-4.

Sam Walker and Tom Jarvis reached the final of the men’s doubles at the National Championships after the lost the final two years ago.

Beaten finalists in 2020, Walker and Jarvis made it to another men’s doubles final at the National Championships with a four-set win over Josh Bennett and Shayan Siraj. The first two sets were quickly won by the experienced pair, however Bennett and Siraj, who had gone down with cramp in a previous match, came back strongly to take the third set.

This only spurred Walker and Jarvis on, who weren’t going to waste the opportunity to go through to another final, in Liam Pitchford and Paul Drinkhall’s absence. The score was 11-9, 11-6, 6-11, 11-8.

They will face Chris Doran and Joe Ferguson in the final, who have had an excellent run so far. They beat Ben Piggott and Graeme Barella in straight sets.

Robert Pelc and Jamar McGlashan couldn’t make the most of the bye they received into the quarter-final as a result of Paul Drinkhall’s withdrawal. They lost to Barella and Piggott.

Ferguson and Doran made it through a tough match with Louis Price and Josh Weatherby, winning 3-1. After Price and Weatherby eased to the first set, the pure power of Doran and Ferguson started to take over. However, Price and Weatherby had a chance to take it to five with two set points in the fourth. They couldn’t take it, with Doran and Price going through 5-11, 11-6, 11-2, 12-10.

Walker and Jarvis eased into the semi-final with a straight-set win over Naphat and Naphong Boonyaprapa.

Walker and Jarvis began their quest for gold with a win over Connor Green and Felix Thomis, despite a scare in the first set. Green and Thomis had a set point in the first, losing it 15-13. The youngsters gave a good account of themselves and used their left and right-hand combination well. However, the Olympic experience of Walker and Jarvis shone through to take it 15-13, 11-6, 11-7.