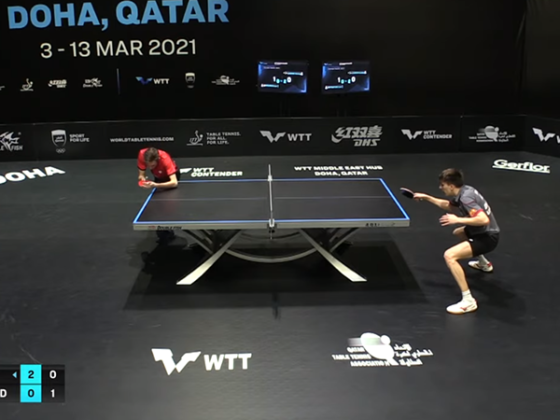 Liam Pitchford, hampered by a hand injury, suffered a surprise defeat in the first round of the WTT Contender event in Doha today, going down in four games to world No 144 Andreas Levenko.

His Austrian opponent continued his rich vein of form from the qualifying rounds, where he beat Paul Drinkhall as well as two other players ranked higher than him – Aleksandar Karakasevic (SRB) and Benedek Olah (FIN).

Levenko dominated the first game and stayed on top in the second as Pitchford seemed to struggle with Levenko’s serve. But when the Englishman took the third game 11-5, it seemed as if he had got to grips with his opponent.

However, Levenko got his nose in front in the fourth and took the first of three game points to set up a last-16 tie against Daeseong Cho of South Korea.

Pitchford said after the match that an injury to his right thumb, suffered in training in England before travelling, was still causing problems and he was unable to grip the bat properly or to generate power without pain.

As a result, he and Drinkhall pulled out of their scheduled last-16 doubles tie against Iranian duo Nima Alamian & Noshad Alamiyan.

Pitchford is hoping the injury will clear up sufficiently for the WTT Star Contender tournament and World Olympic Qualifying Tournament which follow this event.

Pitchford is the second England player to have injury woes in Doha, after Sam Walker turned his ankle during his first match. With Paul Drinkhall also defeated in his opening match, Tin-Tin Ho was the only English player able to pick up a victory.