Grantham and Fusion triumphant in Europe 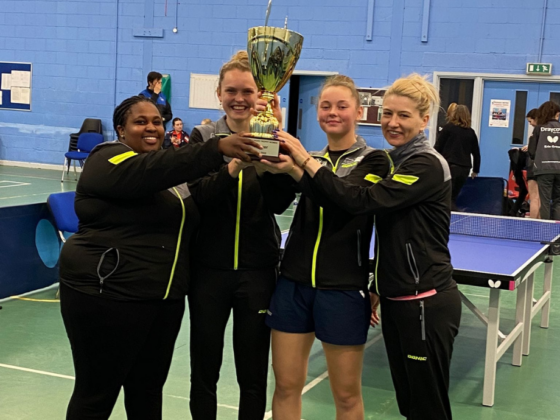 The first ever Europe Trophy took place over the weekend – the third level of the European club competition, after the Champions League and Europe Cup.

The competition is played regionally (8 regions) all in group stages and the regional winners qualify for a Grand Final in order to award the Europe Trophy winner.

Over the weekend Fusion TTC hosted the Men’s competition and Ormesby hosted the Women’s, with a total of 14 teams taking part in the Region A stage of the competition.

Fusion TTC came out on top in the Women’s Region A Europe Trophy winning five out of their six games across Saturday and Sunday.

Ormesby TTC streamed selected matches on their Facebook page which you can watch again here.

In the Men’s competition there were eight teams competing across two groups. Grantham Table Tennis Academy won all of their group matches, and went on to beat the winners of Group B, Draycott & Long Eaton TTC 3-1 to claim the Men’s Group A Europe Trophy.

Jordan Wykes was the star of the weekend with a 100% win record for Grantham.

Fusion TTC live streamed selected matches on their Facebook page which you can watch here.

For full results from both competitions visit the ETTU website here.

Region A winners Fusion and Grantham, plus Draycott & Long Eaton, who were runners-up in both men’s and women’s competitions, will all now go on to compete in the Grand final in Portugal from June 17-19.