Gold at the double for Bouron in Mexico

Pathway athlete Lucie Bouron won gold in the women’s doubles and the mixed doubles on the final day of the Copa Cristina Hoffmann in Cancun, Mexico. 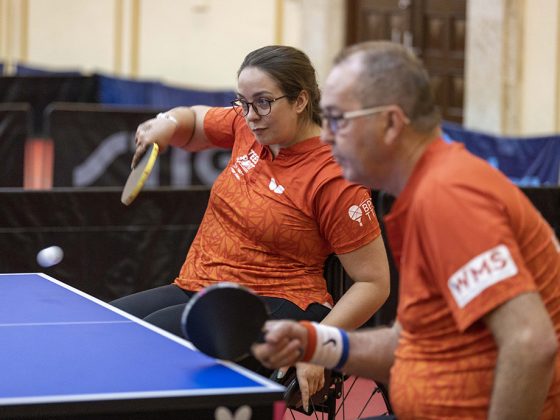 Pathway athlete Lucie Bouron won gold in the women’s doubles and the mixed doubles on the final day of the Copa Cristina Hoffmann in Cancun, Mexico.

The 27-year-old from Bracknell won the mixed doubles with British teammate Simon Heaps and then combined with Tamara Leonelli Leonelli from Chile to win the women’s doubles. On a good day for the British Para Table Tennis squad, Craig Allen and Ryan Henry also took bronze in the men’s doubles.

Bouron and Leonelli Leonelli, the class 5 PanAmerican champion, won gold in the team event here in 2019 and teamed up again in the women’s doubles. They began with a 3-0 win against the Colombian/Mexican partnership of Manuela Guapi Guzman and America Aguilar Alvarez and were then 3-1 winners against Tara Profitt and former PanAmerican champion Pamela Fontaine from USA, clinching the victory 19-17 in a marathon fourth set.

They were 3-0 winners against the second American pair of Cynthia Ranii and Valerie Rolph and after dropping the first set of their final match in the round-robin event against the top seeds Martha Verdin, a former PanAmerican champion, and five-time PanAmerican champion Edith Sigala Lopez from Mexico, came back to win 3-1 and secure the gold.

Heaps and Bouron (pictured above) won their first match against Zachary Pickett and Valerie Ann Rolph from USA 3-1 and were then 3-0 winners against Martin Gomez Villalpando and America Aguilar Alvarez from Mexico.

Their final match in the round-robin event was to decide the gold medal and this time Bouron was on the other side of the net from Leonelli Leonelli who was partnered by Gerardus Van Grunsven from Netherlands. From 2-0 down the British pair fought back to take the third 11-7 then level at 2-2 after edging a tight fourth set 15-13. They then took the deciding set 11-6 to secure the gold.

“I’m really happy to come away with two gold medals in the doubles,” said Bouron, “and am pleased with how I played overall. It was nice to play with Tamara again and having played together before we found it easier to get into our rhythm in a match. I also enjoyed playing mixed doubles with Simon for the first time.

“I felt that our styles of play complemented each other and that helped us to get through our matches. To come through and win our final round-robin match from 2-0 down was a great achievement.”

“It’s great to get my first gold while representing GB,” said Heaps, “but mixed doubles is a team effort and Lucie was superb. Coming back from 2-0 down we dug deep, listened to our coach Matjaz (Sercer) and slowly the match turned. From being the pair under pressure we turned the tables on our opponents by following tactics from Matjaz.

“On a personal level I have taken bronze, silver and now gold in the last two tournaments so I’m really pleased. But Lucie deserves great credit and she has also had a great tournament.”

Allen and Henry started with a 3-0 win against the Mexican pair of Efrain Edgardo Espinosa Urzua and Enrique Preza and followed that with a 3-0 win against Hernan Rojas Fonseca and Nixon Reyes from Costa Rica. They secured top place in their group with a 3-1 win over the teenage pair of Miguel Castro and Santiago Ramirez from Colombia, who were both making their international debuts in this tournament.

In the quarter-finals, the British pair took a close first set against Amilkar Naranjo and Jose David Bernal Gil from Colombia 14-12 and having taken the second 11-7 they secured a 3-0 win 14-12 in the third to go through to the semi-finals where they were beaten 3-1 by the second seeds from Colombia Jose David Vargas Pirajan, the five-time PanAmerican Championship medallist, and class 10 PanAmerican team medallist Alvaro Francisco Puerto Alvarez.

“I’ve enjoyed playing doubles with Craig,” said Henry, “and I feel we played well overall. I think we lack the experience of playing together and could definitely improve tactically as to how we can implement both our games as best we can while playing together.

“In the semi-final there were a few key points where we could have done better which definitely swayed the momentum of the match but overall I felt we played well and I look forward to us playing together again.”

“I feel Ryan and I played well together,” agreed Allen, “losing only one set in the group matches and winning the quarterfinal 3-0. It was a very close match in the semi-final and considering Ryan and I haven’t played together for a very long time we complemented each other very well. I think with a bit more practice we could win that match next time.”

Heaps and 41-year-old class 3 Ramon Briceno Gonzalez from Colombia were just edged out 3-2 in their first group match by the Canadian/American partnership of Mohsin Ali Watto and Zachary Pickett 13-11 in the fifth and were then beaten 3-0 by Tokyo class 3 bronze medallist Jenson Van Emburgh and PanAmerican Championship silver medallist Ahad Bakhshaei Sarand from USA.

They did not progress after a 3-1 defeat in their final match to the class 2 PanAmerican champion Victor Eduardo Reyes Turcio and class 4 PanAmerican Championship team medallist Francisco Alam Gonzalez Hernandez from Mexico.