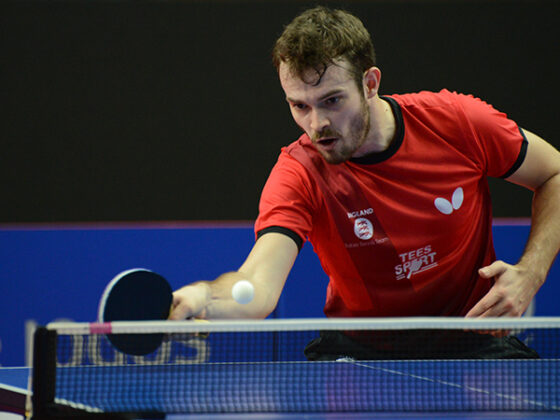 Paul Drinkhall and Charlotte Carey topped their groups to make it through to the knockout stage of the European Singles Qualification Tournament in Portugal.

Sam Walker also made it through as a group runner-up, but went out in the first round tonight, while Tin-Tin Ho was eliminated in the group stage.

Drinkhall and Carey both have a bye in the first round and next play on Friday. The matches will be streamed live on ETTU TV – Carey against Katarina Strazar of Slovenia at 11.50am and Drinkhall against Jakub Dyjas of Poland at 1.30pm. Both matches are on table 2.

Drinkhall made short work of his third and final group opponent, Daniels Kogans of Latvia, whitewashing him in game two and conceding only 11 points as he romped to victory in four straight in a match which was not live-streamed.

Carey also continued her good form from yesterday, when she beat Debora Vivarelli, who is ranked 80 places above her. The opponent today was Tatiana Kukulkova of Slovakia and Carey always had the edge after turning an 8-4 deficit in the first game into a 9-8 lead – forcing an early timeout from Kukulkova.

Carey completed a 12-10 win in that game and opened up a 3-0 lead before her opponent, who at No 139 is 12 places higher than Carey in the rankings, put a game on the board. But Carey took the fifth 13-11 on her second match point to advance to the first knockout stage as winner of the three-player group.

Ho was eliminated having lost 4-0 to Bulgaria’s Polina Trifonova, the fourth-ranked player in the group but who took two victories go through behind unbeaten group winner Sabina Surjan of Serbia.

The first three games were comfortable for Trifonova, but Ho made a real fight of the fourth, saving four match points but also missing the chance to win the game herself before the Bulgarian eventually prevailed 18-16.

The final player on court was Sam Walker, up against Finland’s Alex Naumi (WR 265), with both knowing a win would put them through.

Walker started well and never let left-hander Naumi back in, though the Finn did briefly threaten a comeback by winning the third. But Walker clinched it on his third match point to go through behind surprise group winner Eric Glod of Luxembourg.

Walker was drawn against Romania’s Rares Sipos in the first knockout round, Sipos having been runner-up in Drinkhall’s group having lost 4-1 to the Englishman.

The world N0 149 put in a consistent show against Walker, who by contrast is still finding his game after suffering an ankle injury in his first match in a year at the world qualifiers just over six weeks ago.

It was four straight as Walker was in contention in every game but never quite close enough to pressurise his opponent.