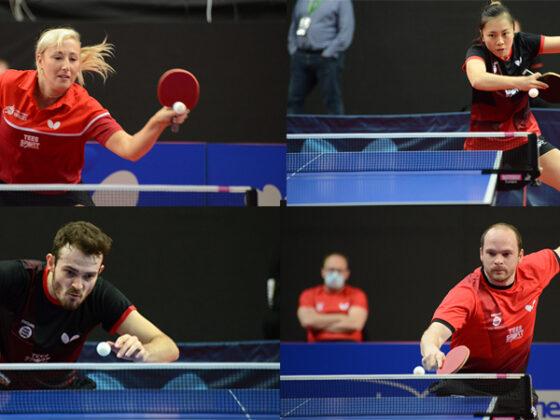 The four Team GB players have been reflecting on missing out on securing an Olympics place at the European Singles Qualification Tournament. Here’s what they said:

Lost in the semi-final and third-place play-off of Stage 3 – victory in either would have seen him qualify.

“I think I was in a good place throughout the tournament and played some good matches and did the right things at the right times, but in the end I just didn’t quite have enough.

“It’s a shame to miss out in those two ‘final’ matches, but the other players are in good form and shape as well because they’ve got to that stage. They’re always going to be tough matches.”

On taking an injury timeout in the semi-final, he added: “The first match, it was hard for me because it was difficult to move into the positions to play the shots I wanted. I was trying to adapt my game and I struggled to do that – I managed it at some points but not consistently enough.

“I worked with the physio between matches and it felt better. There was still a slight ache but I played through it and got a bit more confident with it.

“The frustrating thing is not being quicker in trusting it. I was holding back a little bit in the first two sets but I got myself into a position where I had a chance to win.

“Injury or no injury, they are tough matches to win, against good opponents, and in that last match especially I did a good job in putting up a fight.

“Sirucek raised his game when he had to and he stayed quite calm, so credit to him, but I also made a few mistakes in the fifth and could have made it more difficult for him.”

“To win against three higher-ranked players and put in that sort of performance against Jieni Shao, I’m pretty happy. I’ve watched them back and I feel like finally all the stuff I’m doing in practice is starting to pay off.

“After the match against Jieni, I’ve never been so upset about a table tennis match. I had some match points and I didn’t think I did anything wrong on them – I was quite calm but I also knew she was a good player and could still win.

“The point when I thought the ball touched her shirt, that’s the most gutting thing. It’s very hard to say for certain (that it touched) but I shouldn’t have stopped, I should have carried on playing.

“I was gutted, but I can’t say I haven’t played some of my best table tennis, so I’m pretty happy and have taken a lot from it. I’m definitely looking forward to getting into the practice hall with positivity and working towards the Commonwealth Games.”

Lost in the first round in both knockout stages.

“I didn’t really know what to expect because I hadn’t played properly in a tournament for over a year and literally just came back from an injury and only had a few days’ training.

“In terms of my performance at the table, it was inconsistent – at times there were good things and at other times pretty bad things.

“But it’s good for me to see where I am at in my game after such a long time away and to move forward and put the work in to get better.

“Obviously, getting the five matches was good for me and to a certain extent after coming back from injury, that’s probably better than being in training.”

“There’s a few things coming up but the next big one is the Commonwealth Games, but that was my next goal anyway. I wasn’t really thinking about the Olympics because I thought my chance had already gone when we didn’t qualify as a team, so nothing much has changed.”

Eliminated in the group stage, having beaten Ana Tofant (WR 242) but lost to Sabina Surjan (WR 137) and Polina Trifonova (WR 408).

“As you’d expect, I’m disappointed with the result and my performance.

“I wasn’t that surprised by her (Trifonova’s) performance. I didn’t consider her ranking as I knew she is a good and solid player. I think if I performed a bit more consistently myself, I would have given myself more of a chance. She also caused me to make mistakes and I didn’t adapt well to her game.

“In terms of qualifying for the Olympics, there’s nothing I can do now, so I’ll try to look forward, improve and keep learning.”