Four players remained unbeaten at the end of the first day of the Cadet National Cup at St Neots TTC. 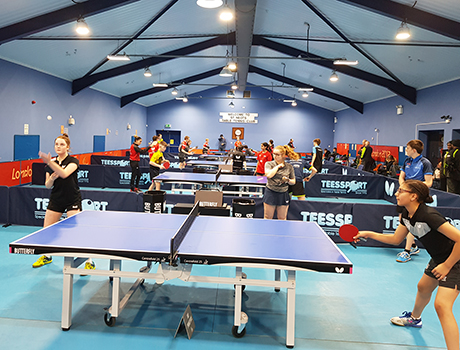 Four players remained unbeaten at the end of the first day of the Cadet National Cup at St Neots TTC.

The top two seeds, Jakub Piwowar in the boys and Maliha Baig in the girls, won all their five matches but it was the respective third seeds – Larry Trumpauskas and Sienna Jetha – who also boasted 100% records.

The second seeds both dropped a match against lower-ranked opposition in the tournament which sees the top 10 in the rankings face each other in a round-robin format.

Maric-Murray won his other four matches to sit in third place alongside Ralph Pattison, with Jones tucked into fifth. Two of Maric-Murray’s wins were in deciding fifth games, against Joseph Dennison and Isaac Kingham.

Baig and Jetha were pretty untroubled in winning their five matches, dropping only four games between them, but second seed Bethany Ellis was defeated in a tight clash in round four by Ella Pashley, ranked ninth, who sneaked home 3-2 (11-13, 11-7, 8-11, 13-11,13-11).

Ellis won her other four matches, including a deciding-set tie against Mia Lakhani, to sit in third place, with Pashley enjoying an excellent day to sit fourth, having picked up further victories over fourth seed Connie Dumelow and fifth seed Rachael Iles.

Three other matches went the distance, resulting in victories for Iles over Mabel Shute, Lakhani over Shute and Naomi Coker against Kate Watkinson.

The final four rounds of matches are on Sunday – click here to read the final report.