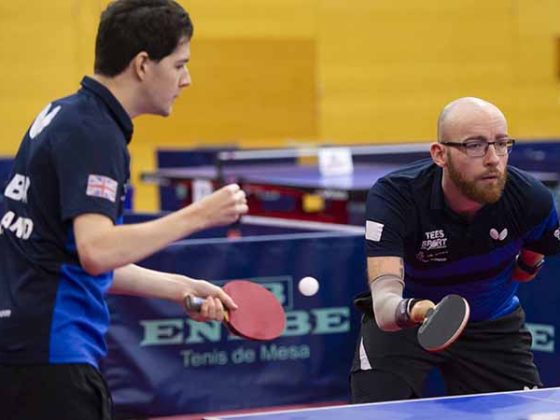 Having beaten the India1 team of Yesdi Bhamgara and Ramesh 2-0 in their first group match, Perry and Bland won the doubles 3-0 against the Polish/Hungarian combination of Piotr Manturz and Balint Celencser and Perry secured a 2-0 win with a determined performance against Manturz, coming back from 2-1 down to win 11-7 in the fifth and avenge a narrow defeat by the Polish teenager earlier in the week.

As group winners Perry and Bland received a bye into the semi-finals where they played the Swedish team of Jonas Hansson and Sam Gustafsson, who had both reached the quarter-finals of the men’s class 7 singles earlier in the week. Having started well Perry and Bland lost the doubles 3-0 and although Perry fought hard against class 7 Hansson the Swedish player came through their singles 11-6 in the fifth to take his team into the final and leave Perry and Bland with the bronze.

“I was really pleased to beat Manturz after he beat me in the singles,” said Perry. “Overall, it was a solid team performance by Alex and me. We got through our group quite easily which shows the level we were playing. In the semi-final against a decent class 7 player from Sweden I was really happy with how I played although I lost 3-2.

“I feel that I put him under a lot of pressure and was serving well and playing to my strengths so there are some positives I can take out of that result despite it being a loss. Obviously, we would have liked to get to the final, but it wasn’t meant to be. I’m happy to get another medal and it’s been a relatively good tournament.”

“Although we were seeded second and on paper should have got at least silver we came up against a strong and in-form Swedish team who were both class 7,” said 22-year-old Bland from Rotherham. “Martin and I should take positives away from the team event though as we backed up our bronze in Spain with another bronze here, playing some good doubles and showing good team spirit throughout.”

Daybell and Thakker made the perfect start with a 2-0 win against Austria/India, taking the doubles against Noah Rainer and Vishwa Tambe 3-0 and Thakker beating European Youth Para Games bronze medallist Rainer 3-0. A 2-0 loss to the strong Nigerian team of Tokyo team bronze medallist Alabi Olufemi and Francis Chukwuemeka left them needing to beat Luxembourg to progress from the group and after a 3-1 win in the doubles against Mateo Scuto and Phillippe Hein, Daybell secured the tie with a comfortable 3-0 win against Scuto.

That took them through to a semi-final against the top seeds from Poland and they had to settle for bronze after they lost the doubles 3-0 to singles gold medallist and world No 7 Igor Misztal and Costa Brava Spanish Open silver medallist Pawel Wlodyka and Thakker was beaten in four close sets by Wlodyka.

“It was an absolute pleasure to play with Kim,” said Thakker. “He is someone I really look up to for his sporting achievements and what he does outside the table tennis hall. I am very happy to have won a bronze medal, but this tournament has reinforced the need for me to train harder and demand more of myself in practice. In the singles I believe that I played well at times, but I hope to make greater improvements in the future, and this starts in the training hall.”

In the men’s class 1-2 team event, class 2 Guy teamed up with Timo Natunen from Finland, the 34-year-old class 1 world No 16. Their first match was against a combination from Korea, Israel and Cyprus and they made a good start, winning the doubles against class 2 Chen Barukh from Israel and Antreas Aravis from Cyprus 3-1. Natunen lost the first singles 3-1 to Hakjin Kim, the class 1 Asian Championships bronze medallist, but Guy secured a 2-1 win with a 3-1 defeat of Barukh.

Guy and Natunen again combined well in their second match to win the doubles 3-1 against Benoit Besset and Nicolas Marly representing the second French team. Guy then lost a very tight match to class 1 world No 18 Alan Papirer, taking a 2-0 lead and losing the third set 16-14 before eventually being edged out 12-10 in the fifth. In the deciding singles Natunen beat Marly 3-0 to earn another 2-1 win for his team.

They lost their next match to the number one French team 2-1, losing the doubles to Vincent Boury, former class 1 Paralympic champion and world No 1, and class 2 Julien Michaud, silver medallist in the singles. Michaud beat Guy 3-0 in the deciding singles after Natunen had beaten the unranked class 1 Charlelie Arnaud 3-0.

In their final match against Poland/Hungary they lost the doubles 3-0 to Tomasz Jakimczuk, the class 2 world, Paralympic and European team medallist, and Endre Major, the class 1 world No 5 and European silver medallist. Guy levelled the tie with a 3-0 win against the Hungarian Adam Urlauber but Jakimczuk was too strong for Natunen in a 3-0 win that left the British/Finnish team with the bronze medal.

“I think I played well overall,” said 32-year-old Guy from Devon, who was competing in only his second international tournament. “It’s easy to put yourself down for not winning but I know I had a tough draw and played against some very experienced players. My team-mate and I played well together in the team event and it feels great to come away with a medal again at consecutive tournaments.”

Allen teamed up with Gyula Zborai and Barnabas Retter from Hungary in men’s class 9 and they began the round-robin event with a 2-0 win against the Costa Brava Spanish Open team silver medallists from Czech Republic. Allen and Retter fought back from 2-0 down in the doubles against David Pulpan and Vit Spalek to win the third set 12-10 and went on to take the match 3-2 before Retter beat Miroslav Brozek 3-1 in the first singles.

In their second match against Netherlands Allen and Retter lost the doubles to Bart Van der Zanden and Roy Van der Burg 3-1 and Allen was then beaten in four close sets by World number 21 Van der Zanden. Allen and Retter won a tough five set doubles match against the French teenagers Baptiste Guillas and Melvyn Rabillard and Zborai secured a second 2-1 win for GBR/Hungary by defeating Rabillard 3-0 after Guillas had beaten Allen 3-0.

“I think I played OK,” said 27-year-old Allen from Bromsgrove, “but the lack of match practice has impacted my performance. I feel I can do well going forward but I need to go back to training and work on a couple of issues and play more tournaments at home so I can come back stronger. I enjoyed playing with Barnabas as we have played together a few times now and we play well together in doubles.”

Class 6 Fliss Pickard and class 8 Grace Williams faced a tough challenge in women’s class 7-10 and although they didn’t win a match they performed with great credit.

Dan Bullen and Simon Heaps faced the European team bronze medallists Norway in their first match in Group A and lost the doubles 3-0 to Tommy Urhaug and Sebastian Vegsund. Heaps then fought back from 2-0 down to defeat 20-year-old Vegsund 3-2 before world No 4 Urhaug, the former Paralympic, world and European champion, secured the win for his team with a 3-0 defeat of Bullen.

That left the British combination needing to beat India in their second match and they lost the doubles 3-1. Bullen levelled the tie with a 3-1 win against Trivendra Singh but Heaps lost the deciding singles to Raj Alagar and it was India who progressed to the semi-finals.

York and Roelofs combined well in the doubles to beat the German/Brazilian partnership of class 5 former European team gold medallist Joerg Didion and 15-year-old Lucas Carvalhal Arabian 3-0, but Roelofs lost 3-1 to the Brazilian teenager and York lost in three close sets to Didion to lose the tie 2-1. In their final match against Nigeria, they lost the doubles to class 3 African champion Ahmed Koleosho and class 5 former African champion Nasiru Sule 3-1 and York was beaten 3-0 by Isau Ogunkunle, the class 4 World number 13.

Theo Bishop teamed up with Yotam Sheinfeld from Israel and they had a tough opening match in Group C against the Japanese/French combination of Kazuki Shichino and Esteban Herrault, winner of the men’s class 6 singles here. Having lost the doubles 3-0 Bishop was beaten 3-0 by European team bronze medallist Herrault.

Sheinfeld. They lost their final match 2-0 to Tomas Valach, the class 7 European team bronze medallist from Slovak Republic, and class 6 Haris Eminovic from Bosnia and Herzegovina, losing the doubles 3-0 and Eminovic defeating Sheinfeld 3-0.