Four athletes on podium in Mexico 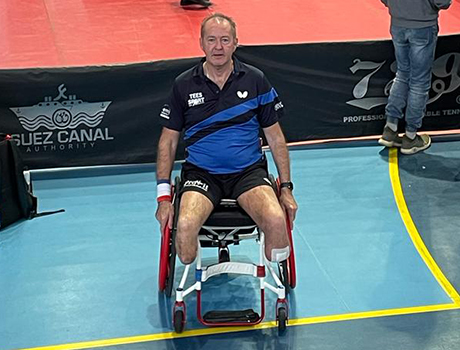 Heaps (pictured above) lost his opening match 3-0 to the American Ahad Bakhshaei Sarand, the PanAmerican Championship silver medallist who won silver in the Costa Brava Spanish Open in March, but progressed from his group after a hard-fought 3-1 win against Hector Castaneda Ossa from Colombia, the bronze medallist here in 2019.

Heaps came through his semi-final against Maitree Kongruang from Thailand, gold medallist here in 2019, 3-0 to go through to the final and another match against Sarand and the American once again proved just too strong in a 3-0 win.

“My first singles medal at the age of 66 proves that in Para table tennis age is not so important,” said Heaps. “I am thrilled but this a culmination of a lot of hard work and dedication. I got my first Para medal in Jordan a couple of weeks ago – bronze in the doubles – so this is an improvement.

“I know I can play better if I practise hard as I am still learning the complexities of international wheelchair table tennis.

who was competing in an international tournament for the first time since 2003.

The 21-year-old Scot then came through a really tough battle against Marco Makkar, silver medallist in the Para Copa Costa Rica last year, holding his nerve to take the deciding set 11-8 after the American had fought back from 2-0 down to level at 2-2.

That took him through to the semi-finals where he lost 3-0 (7,8,8) to Steven Roman Chinchilla from Costa Rica, the 19-year-old former PanAmerican champion who won gold in the Para Copa Costa Rica 2021.

“I’m happy with how I played overall in the singles and to take home another bronze medal,” said the 21-year-old from Ardrossan. “I felt I prepared well and stayed focused to win all my group games 3-0 as some sets were tough and it’s easy to lose concentration at times when you are winning but I kept focused and finished off all three matches 3-0.

“I was also happy to get through a very tough quarter-final. I felt I played well and kept calm in the fifth to get the win. I’m disappointed to have lost my semi-final but I played well and have some good experience to reflect on back home in training and look forward to getting another opportunity in the future.”

Allen began with a close four set loss to Julian Chinchilla Ramos, the 18-year-old PanAmerican Championships team bronze medallist and 2021 Copa Costa Rica champion, fighting back from 2-0 down to win the third set 11-8 before the Colombian edged the fourth 13-11 to take the match.

Allen secured his place in the semi-final with a 3-0 win against the unranked 18-year-old from Ecuador Louis Vera Poguio and had his chances against the American world No 10 Tahl Leibovitz but the seven-time PanAmerican champion and former Paralympic champion used all his experience to win 3-0.

“Overall, I’m happy with my performance and how I played against Tahl today,” said Allen, “as he is a tricky player. I had my chances in the sets on numerous occasions but wasn’t quite able to take them. At 7-5 in the first set and 8-8 in the second there was everything to play for but I couldn’t finish the sets off. Now I need to watch the videos back home with my coach and work on the areas where I let the sets get away from me. I have been playing against different styles in training over the last few months and it is really starting to pay off.”

Bouron was defending the title she won in 2019 and competing for the first time since the Para Copa Costa Rica in December that year. She lost her opening match to Edith Sigala Lopez from Mexico, the class 3 world No 14 and five-time PanAmerican champion, in four close sets and was then a 3-0 winner against Cynthia Ranii from USA, the former PanAmerican Championship team medallist.

Bouron had to settle for bronze after losing her semi-final to Manuela Guapi Guzman, the 20-year-old PanAmerican Championship bronze medallist and 2017 Youth Parapan Games gold medallist from Colombia, 11-9 in the fourth.

“I’m really pleased to come away with a singles medal,” said Bouron, “especially as it is my first tournament since December 2019. Overall, I think I played well but there were definitely some areas in my game where I was making errors and I think this is due to not having played in a women’s class 3 style match for a while.

“Moving forward I know what I need to work on back home and implement in future tournaments. I’m looking forward to playing with Tamara (Leonelli Leonelli) in the women’s doubles again – hopefully we can retain our title – and playing in my first mixed doubles match with Simon (Heaps).”