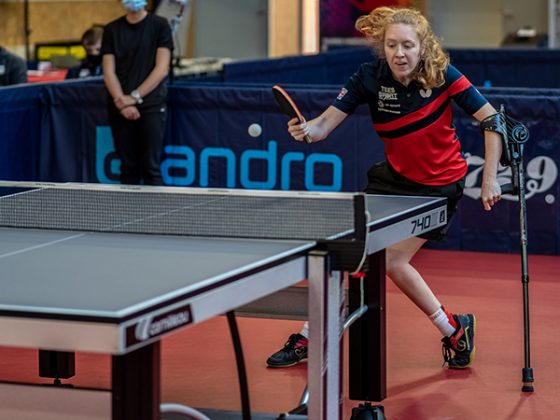 Pickard lost only two points in her opening group match against the world No 23 from India, Poonam Poonam, and secured her place in the semi-finals as group winner with a 3-0 win against 26-year-old Merethe Tveiten, the former European Championship team bronze medallist from Norway.

A 3-0 win against French teenager Morgen Caillaud took her through to the final against former world champion and Paralympic team gold medallist Katarzyna Marszal from Poland in a repeat of the Costa Brava Spanish Open final last month which Pickard won in five sets. It went the distance again today, with the 27-year-old from Burnley fighting back from 2-1 down to level at 2-2 before clinching the match and the gold 11-7 in the fifth.

“The singles tournament was really good for me especially with the numbers in class 6 growing all the time,” said Pickard. “I feel this was one of my most disciplined performances throughout. The way I focused on my processes and the level in the final from both of us – it was just a great match to be involved in.

“I would like to thank Shaun Marples (BPTT Pathway Manager) who helped me massively in the corner and without the support of the rest of the team I couldn’t have got through the match.”

Perry lost his opening match to Piotr Manturz from Poland, fighting back to level at 2-2 after the 17-year-old had led 2-0 but losing the deciding set 11-6. His second opponent, Haris Eminovic from Bosnia and Herzegovina, had edged their previous encounter in the World Qualification Tournament in June in five sets but it was Perry who came out on top this time with a 3-0 win.

After Eminovic beat Manturz 3-2 the group was decided on countback with Perry going through to the semi-finals as group winner to play Kazuki Shichino. The Japanese player took silver in the World Qualification Tournament, beating Perry in a five-set quarter-final, but the Scotsman avenged that defeat today with a 3-1 win.

In the final he took on the improving Esteban Herrault, gold medallist in the Costa Brava Spanish Open last month when he beat Perry in the semi-finals 3-0. It was closer today, but the Frenchman just had the edge and took the gold with a 3-1 win.

“The tournament didn’t get off to the best of starts for me losing in the fifth,” said Perry, “but thankfully I managed to turn that around and get a good win over Haris, who I lost to last time we played and who was in Tokyo so it is always nice when you beat a Paralympian.

“It was a bit of personal redemption against Shichino, who ended my chances of going to Tokyo in the qualification tournament when I lost 11-9 in the fifth so to come through that match 3-1, I played really well.

“I lost to Esteban a couple of weeks ago in Spain, so I knew what the tactics were going to be going into the match, but I’ve got to give him credit. I thought he played exceptionally well and his forehand just wasn’t missing today. It was a very tight match and we both played some good stuff. I’m disappointed not to bring him the gold after being number one seed but Esteban has a lot of home support and credit to him for winning.”

Daybell finished top of Group C in men’s class 10 after 3-0 wins against 18-year-old Vishwa Tambe from India and 17-year-old Frenchman Julien Cigolotti. That took him through to the quarter finals where he played the two-time African champion Alabi Olufemi. The Tokyo team bronze medallist from Nigeria led 2-1 but Daybell fought back to take the fourth set 11-5 and held his nerve to take the deciding set 11-9 and the match 3-2. He lost his semi-final to world No 7 Igor Misztal from Poland, gold medallist in the Costa Brava Spanish Open last month, 3-0 but can take plenty of positives from his performance.

“It was good to be playing at the highest level again after such a long time,” said Daybell. “After missing out on selection for Tokyo I took a prolonged break just to get back into the mindset of wanting to play again and I was pleased to come through a tough quarter-final against one of the Tokyo medallists, showing that I’m still up to the level of the guys that went out there.

“The semi-final was a tough game against a good player – that sharpness and match fitness weren’t there for me and while my experience and quality allowed me to get through the early stages when I came up against the top seed, he just had a bit too much today. It has reminded me of the level that I need to get myself back to and the level I was playing at previously, so lots of hard work to do back in the training hall and I’m looking forward to getting my head down and putting in some hard training before Christmas.”

Bullen began with a 3-1 loss to Nasiru Sule, the former African champion from Nigeria, and then came through a great battle against Lucas Carvalhal Arabian from Brazil, fighting back to win 3-2 after the 15-year-old had led 2-1. The 23-year-old from St Neots had to fight hard again in his final Group C match against Raj Alagar from India before securing a 3-2 win that took him into the quarter-finals.

Once again Bullen showed all his character and determination to fight back from 2-0 down to defeat 17-year-old Isak Nyholm from Sweden 11-5 in the fifth and set up a meeting with world No 4 Tommy Urhaug. The former World, Paralympic and European champion from Norway was too strong today in a 3-0 win but Bullen can be proud of his performance.

“To get to the semi-finals is an amazing achievement for me,” he said. “I’d never beaten Isak before today and after going 2-0 down and him dictating the play I really had to fight and turn my game on so I was dictating to him and not letting him play the way he wanted to play.

“I’m really happy with my performance out here because I’m starting to play the way I want to play, and the way I play in training, in matches which is good progress for me. I’ve also had some really tough matches with all my wins in the fifth set, which is showing how high my energy levels can stay to enable me to keep winning in the fifth. My game against Tommy was a learning experience but I thought I played better against him than I did in Spain so I’m happy about that too.”

Bland began with a comfortable 3-0 win against Yotam Sheinfeld from Israel and then beat the 25-year-old European team bronze medallist Tomas Valach from the Slovak Republic 3-1. His final match against Sam Gustafsson went down to the wire and the 18-year-old from Sweden just edged it 13-11 in the fifth but Bland went through to the knockout stages as winner of Group D.

A 3-0 quarter-final win against 17-year-old Yannick Paredis from Netherlands took him into the semi-finals where he faced Paralympic bronze medallist Maksym Chudzicki. The pair met in the Costa Brava Spanish Open last month where the 22-year-old Polish world No 11 won in three close sets and Bland pushed him again today before losing 11-8 in the fourth.

In her first match Grace Williams pushed 21-year-old Lucie Hautiere all the way in the first set before the class 8 world No 16 from France edged it 12-10 and went on to take the match 3-0. The 18-year-old from Wrexham led Sophia Kelmer 2-1 in her second match but the 13-year-old from Brazil fought back to win 3-2 and Williams went out after a 3-0 loss in her final match to another 13-year-old Magdalen Sutkowska Pawlasek from Poland, the class 8 world No 18.

Andrew Guy was drawn in a tough group and lost his first match to top seed Tomasz Jakimczuk, the world, Paralympic and European team bronze medallist from Poland, 3-0. Having lost to the Frenchman Julien Michaud in the semi-finals of the Costa Brava Spanish Open last month he found the 42-year-old world No 26 just too strong again, losing 12-10 in the third.

Lee York faced the former world, Paralympic and European team gold medallist Emeric Martin in his first match and despite playing in his first competition since 2017 the 48-year-old former world No 1 from France was too strong in a 3-0 win.

After losing a tight first set to Trivendra Singh from India 12-10 York led 2-1 before the 2019 Bangkok Open bronze medallist came back to take a close fourth set 11-9 and went on to win the deciding set 11-6. The 32-year-old from Wakefield went out of the singles after a 3-0 loss in his final match to Peter Mihalik, the world No 14 and Tokyo team bronze medallist from the Slovak Republic.

In Group B, self-funded athlete Simon Heaps lost his opening match 3-1 to world No 16 Joerg Didion from Germany and went out after a 3-1 loss to Nyholm.

In Group A, Theo Bishop fought back from 2-1 down to beat Sanjeev Hammannavar from India 11-6 in the fifth and then put up a great performance against Chudzicki, leading 2-1 before the 22-year-old world No 11 came back to take the match 3-2. Bishop needed to win his final match to go through to the knockout stages but after taking the first set against Kayode Alabi the 33-year-old from Nigeria recovered to take the match 3-1.

Craig Allen was beaten 3-0 by 18-year-old Lucas Didier from France, silver medallist at the Costa Brava Spanish Open last month, and went out after a 3-0 loss to the world No 29 David Pulpan from Czech Republic.

In Group B Shae Thakker was beaten 3-0 by world No 11 Luka Bakic from Montenegro but progressed from Group B after a 3-0 win against Cristian Casal Cappillo from Chile, the 2019 Copa Tango team gold medallist. The 18-year-old from High Wycombe was far from disgraced in a 3-0 defeat by Misztal in the quarter-finals.

The tournament continues with the team events, concluding tomorrow.