Drinkhall misses out on Olympics spot 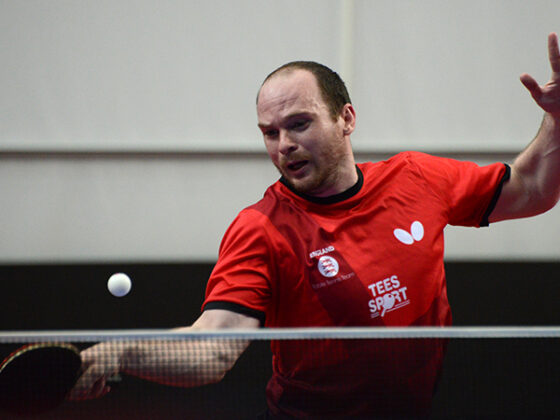 Paul Drinkhall missed out on a coveted place at the Tokyo Olympics as he was beaten in two ‘winner-take-all’ matches Stage 3 of the European Singles Qualification Tournament.

Hampered by injury in the first of those matches, the semi-final, he was beaten in five by Ovidiu Ionescu of Romania.

Drinkhall beat Ionescu in the corresponding qualifying tournament for Rio 2016, but there was no repeat this time. Drinkhall looked ill at ease as, after winning the first point of the match, he lost the next 10 and the first game 11-3.

That there was something wrong was confirmed when he took an injury timeout at 5-1 down in the second, receiving treatment to his right thigh.

He began to look a bit more like his usual self but was still perhaps not fully confident in his movement through the second and third games, but the fourth was a different story as he kept pace and won it 12-10 after saving two match points – the first with a fierce forehand.

But Ionescu pulled away from 4-4 to 9-4 in the fifth and brought up three more match points. Drinkhall saved the first, but Ionescu took his next chance and sank to his kness in celebration.

Drinkhall still had another chance, in the play-off for the final spot against Pavel Sirucek of the Czech Republic.

It did not start well as he lost each of the first two games 11-3, but he turned it around to level, playing some blistering shots on the way. It seemed as if the momentum had turned and Sirucek certainly looked crestfalled as he made his way back to the corner.

If he was, it didn’t last long and a five-point run from 5-5 in the fifth turned the match back in his favour. The sixth saw him open up a six-point lead and then, after taking his timeout at 6-3, a run of four points put him on the brink.

Drinkhall saved four of the match points but it was a bridge too far and, having competed in the last two Olympics, he will miss out on Tokyo.

Earlier in the day, with the disqualification of last night’s scheduled opponent Aleksandr Khanin confirmed after a positive covid test in the Belarus camp, Drinkhall went straight into the stage 3 quarter-finals.

He shook off Eric Glod of Luxembourg in four straight, his left-handed opponent showing a dogged spirit but lacking the weaponry to put Drinkhall under any real pressure.

As well as Ionescu and Sirucek, the other men to qualify for Tokyo through this tournament are Alvaro Robles of Spain, Ukraine’s Kou Lei and Panagiotis Gionis of Greece. The four women to qualify are Prithika Pavade and Yuan Jia Nan (both France), Yana Noskova (Russia) and Maria Xiao of Spain.