Drinkhall and Walker exit WTT but Ho goes through 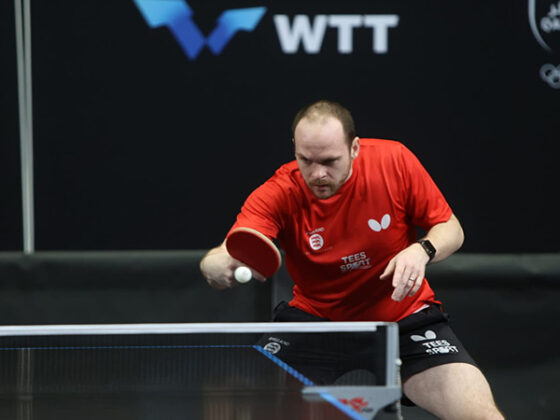 Tin-Tin Ho won her first match at the WTT Contender event in Doha, but Paul Drinkhall was edged out and Sam Walker’s campaign has been ended by injury.

Walker was first on court and lost the first set 11-6 to Italy’s Niagol Stoyanov, but a sprained ankle ended the Englishman’s match – and also saw him and Ho have to concede their mixed doubles tie later yesterday.

This morning, Drinkhall held a 2-0 lead against Austria’s Andreas Levenko (WR 144) in the second qualifying round of the men’s singles, and later held a match point in the fourth, before losing the decider 11-8. Levenko next plays Benedek Olah of Finland.

Ho then played her opening women’s singles match against world No 240 Eva Jurkova of Slovakia and it was a relatively routine win in three straight for the world No 93, who next plays either Sarah De Nutte (WR 76) of Luxembourg.

Liam Pitchford is seeded into the main draw of the men’s singles, which starts on Wednesday.