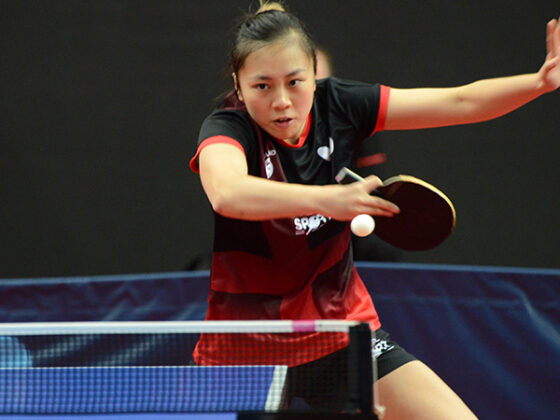 Continuing the theme from football’s European Championships, it’s England v Germany all the way at the table tennis equivalent in Warsaw!

Paul Drinkhall survived a tense encounter in his opening singles match to move into the last 32 – where he will face Timo Boll – while Tin-Tin Ho has earned a crack at the No 2 seed Petrissa Solja.

Drinkhall made a slow start against Adam Szudi of Hungary (WR 115), losing the first two games. But he recovered to take the next three and held a match point at 10-9 in the fourth.

However, Szudi saved that and took the game 13-11. The decider was tight, but Drinkhall moved ahead from 6-6 and brought up another three match points at 10-7. Two were saved, but Drinkhall took his final chance to move into the next round.

His next opponent is none other than seven-time European singles champion Boll, the third seed and these days ranked No 11 in the world. The match is at 4.50pm UK time.

Ho was up against Ana Tofant of Slovenia (WR 243) , whom she had beaten 4-0 in the European Olympic qualifying tournament in April. This time, it was slightly closer, her opponent taking the second game to level the scoreline, but Ho always had enough in hand to complete a 4-1 victory.

Her reward is a tie in the last 32 against Germany’s Solja, seeded two and ranked No 20 in the world. The match is at 2.45pm UK time on Friday on table 2.

In the doubles, Ho & Charlotte Bardsley went out in the last 32 at the hands of German 15th seeds Nina Mittelham & Sabine Winter, losing in three straight.

It was the same outcome for Sam Walker and his Croatian partner Filip Zeljko, who were defeated in three by the Polish 14th seeds, Samuel Kulczycki & Maciej Kubik.