Drinkhall and Ho bow out to German seeds 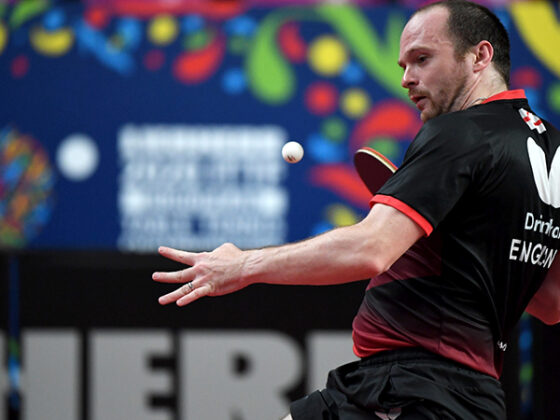 Paul Drinkhall and Tin-Tin Ho both exited to high-ranking German opposition as English interest in the European Championships ended in Warsaw today.

Both their opponents – Timo Boll and Petrissa Solja respectively – went on to win the gold medals. In Boll’s case it was a brilliant eighth European singles title.

Drinkhall, who perhaps surprisingly had never before faced Boll, started their last-32 clash well and took the opening game, but the third seed hit back with the next three.

Drinkhall took his time-out at 3-4 down in the fifth and it did the trick as he powered to a 9-3 lead – Boll looking visibly frustrated by the end of that run of points – before taking the game 11-5 to close the gap.

The sixth saw Drinkhall lead 5-2 but Boll hit back and the scoreline advanced to 8-8 with two Drinkhall serves to come. But the German master played the next three points well, ending with a forehand down the line, to seal his progress to the last 16.

Earlier, Ho took a game off second seed Solja, saving a match point in the process, but could not create any sustained pressure on the world No 20.

Having been held at arm’s length in the first three games, Ho fought back from 2-7 down to lead 8-7 in the fourth. Her opponent hit back to bring up a match point at 10-9, but Ho saved it with a positive forehand and took the next two points to put a set on the board.

But the German re-asserted herself in the fifth to close out a victory and move into the last 16.